My fresh autumn outrage: Michigan Sen. Roger Kahn who, when states like Iowa have moved toward more progressive policy change around HIV criminalization thanks to amazing advocates there and nationwide, has seen fit to expand his state’s law to include sexual transmission of hepatitis C. Despite the fact that hepatitis C is a blood borne virus, and sexual transmission poses some of the lowest risk for transmission, Dr. Kahn has proposed felony charges for said transmission. Not only is the policy regressive and inhumane--as we see with all HIV criminalization laws--the rationale is misguided, and the law will be ineffective. 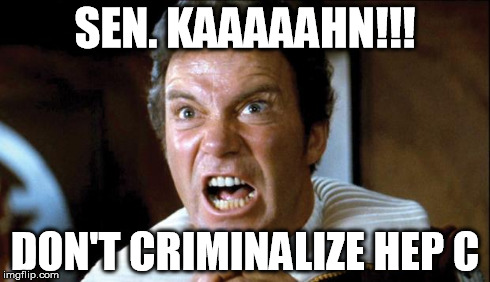 This is a very exciting time in hepatitis C. We have a cure! Unfortunately, the hope born of that innovation was immediately dampened by the high cost of the drug and knee-jerk reactions to restrict access to treatment. I know one strategy that absolutely will not solve the fiscal difficulties of providing treatment to those who need it - criminalizing transmission. As we’ve seen with HIV criminalization laws, if knowing your status can contribute to your prosecution, testing is the last thing people want to do.

With this connection to HIV criminalization, this bill criminalizing hepatitis C transmission poses a number of questions:

How do you prove sexual transmission of hepatitis C? Perhaps more importantly, how do you disprove it? The disease is most often asymptomatic, not showing signs for decades. What happens to the HIV/hepatitis C co-infected population? Are they charged twice; do they serve double the sentence?

Public health problems are not solved with criminal justice responses, the war on drugs has demonstrated as much. As a physician, Kahn should absolutely know better. It is critical that this legislation is not permitted to advance, and to send a message to legislators that we want government representatives who value science over stigma.

Want to give him a piece of your mind? Contact Sen. Kahn.

If you’re a Michigan resident and want to take action, contact Christine at NVHR and/or Suraj at HIV PJA.

Learn more about the National Viral Hepatitis Roundtable at www.nvhr.org.