On July 25, Tell Congress to Protect the Affordable Care Act for People with Hepatitis C

In a country marked by racial health inequities,[1] it should come as no surprise that African Americans are disproportionately affected by hepatitis C (HCV). African Americans comprise about 11 percent of the U.S. population, but account for 25 percent of all HCV patients.[2] On July 25, 2017, the National Black Leadership Commission on AIDS (NBLCA) calls attention to this alarming statistic by launching the Fifth Annual National African American Hepatitis C Action Day. In collaboration with COPE, NBLCA will conduct HCV health literacy workshops, hold HCV outreach and testing events, and promote HCV prevention, screening, and treatment on social media. NBLCA will also partner with NVHR on this day to cosponsor a Call-In to Congress, urging all legislators to protect the Affordable Care Act (ACA). 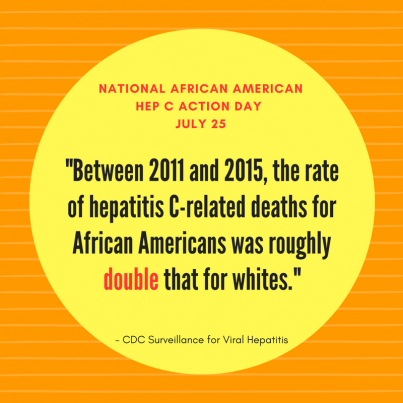 The ACA has been instrumental in extending affordable, comprehensive coverage to those living with HCV. Free preventive services, like HCV testing, are now required benefits for all new health plans and Medicaid expansion programs. Moreover, before the ACA, people with pre-existing conditions like HCV were often automatically denied coverage. But now, thanks to the ACA, insurers can no longer discriminate against people with HCV or other pre-existing conditions. The ACA also requires insurers to offer equal coverage for substance use treatment. This means that people who contracted HCV from opioid abuse can get treatment for their addiction and simultaneously be linked to care for HCV.

Right now, the Senate is considering legislation to repeal the ACA, perhaps even without a replacement. One proposal, the Better Care Reconciliation Act (BCRA), would end the Medicaid expansion, reduce Medicaid funding for states by imposing a per capita cap, and cut financial assistance for many low-income Americans. States could decide what services are deemed essential, thereby allowing insurers to drop benefits like free preventive testing. Insurers would also be permitted to charge people with pre-existing conditions more. Another proposal, the Obamacare Repeal Reconciliation Act of 2017, would simply dismantle the ACA, leaving about 32 million more people uninsured and roughly doubling premiums over the next decade.[6]

Repealing the ACA would be a major step backwards, and would only exacerbate current racial disparities in HCV infection rates.

For these reasons, NVHR and NBLCA urge everyone to call their Senators and House members on July 25 and tell them to oppose any proposal that rolls back the crucial protections of the ACA. For a sample call-in script, please click here.

More People Who Inject Drugs Are Being Treated for Hepatitis C