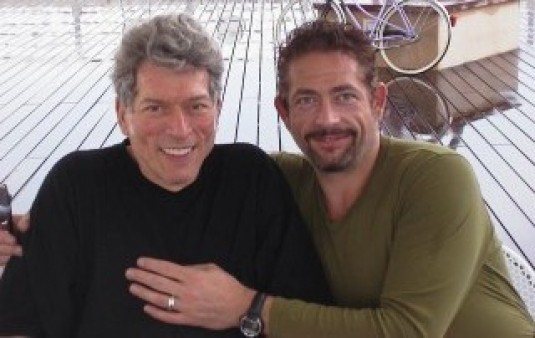 Vinny was even in hospice care for four years, but got kicked out a few months ago for not dying as scheduled “within weeks.” We’ve been together for 14 years; we live in Greenwich Village with our dog Troika and we are active in fighting for equality for same sex marriage - but I’ll talk about that in a later blog entry.

Some of you might recognize my name as a long time HIV/AIDS activist, journalist and author from the pages of POZ, MarkandVinny.com, or my book, Living Positively in a World with HIV/AIDS. Or maybe you know me as the POZ and AIDSmeds website and computer guy. Or as Sean Strub’s business partner in his marketing company.

If you’re “of a certain age,” you might even remember me as the mailing list computer guy for Studio 54, Palladium, Area and The Tunnel. Oh, those were the days to see and be obscene.

More recently, you might have gotten naked with me (get your mind out of the gutter) for the Spencer Tunick art installation and photo shoot for the POZ tenth anniversary cover . That was a great experience, and Vinny and I are very proud of being an important part of the award winning HBO documentary, “Positively Naked,” made about that event. It will finally be broadcast on World AIDS Day, December 1, 2006 at 7 PM (6 PM Central) on Cinemax (which is owned by HBO).

I’ve been asked to write this blog not because of any of these colorful parts of my history, but because of something you probably don’t know about me yet...

During “Hepatitis C Awareness Week” (yes, really, October 1- 7, 2006, at least according to the Australian Hepatitis Council) I found out that in addition to being HIV-positive, I am now living with hepatitis C.

There are about to be some major changes in my life. A lot has happened over the last few days and a lot more will be coming up over the next few weeks. I’m going to use my computer super powers to turn back time a few weeks to post a few blog entries when they happened so I can start at the beginning of this latest chapter...