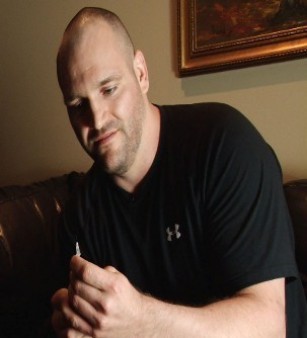 Devon Nicholson has lost 50 pounds since his first week of Hepatitis C treatment due to the side effects of the powerful medications. 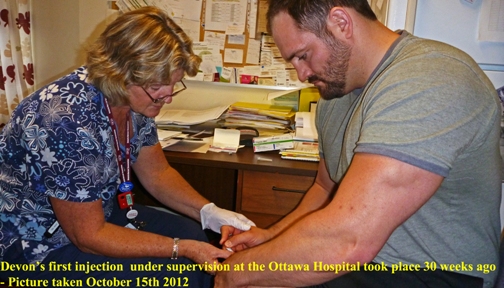 Devon Nicholson’s first interferon injection was taken on October 15th 2012 with the help of his Hepatitis C nurse (Ann Port) at the Ottawa Civic Hospital. Since then Nicholson has been administering the powerful medication on his own. On May 6th 2013 he took his 30th shot.

Nicholson has indicated that his time on Incivek Triple Therapy has been the worst of his life. Hepatitis C patients can die from treatment related side effects. The diseases itself can also be fatal if patient are not cured before the deadly effects of the virus occur.

Devon has had a rough few weeks. A close friend of his families who he has known since childhood passed away during his week 29 of treatment and his long time girlfriend’s cousin passed away due to a tragic car accident at 26 in week 30. On top of that Nicholson’s close friend and fellow Hepatitis C patient Wayne “Superstar Billy Graham” Coleman was recently released from a 12 day hospital stay. He was finally released and is recovering at home under the care of his wife Valerie.

Doctors originally prescribed Nicholson’s 24 weeks of treatment. It would have ended around April 1st 2012. Due to the experimental nature of the treatment his specialists decided to extend the medication time 12 weeks until the end of June. He has been informed that he will have an over 90% chance of a permanent cure if he is able to complete the full 36 weeks of therapy.

Unfortunately the extra 12 weeks added to Nicholson’s medication regime has caused him a lot of physical, emotional and financial issues. Nicholson has now lost over 50 pounds due to therapy and has had a difficult time dealing with the side effects in general. Before going on the medication, he was financially prepared for 24 weeks of treatment. The extra treatment time has been a huge financial weight on him.

Although Nicholson has experienced a lot of positive support from many and has a lot of people behind him while on treatment he has unfortunately also experienced discrimination due to his Hepatitis C status because of the negative stigma still associated with the disease. He understands this is one of the consequences of undergoing his experimental treatment publically. Devon feels the cause of spreading awareness of the disease and helping others is worth being treated differently by some.

An epidemic is widespread occurrence of an infectious disease at a particular time. With an estimated 170 million people being known to have Hepatitis C worldwide, it is considered a health epidemic. As the disease is still not part of regular physical blood testing, many people with the disease do not know they have it until they begin to suffer serious side effect. Many Hepatitis C patients are never cured of the illness due to difficulties with side effects or the treatment not having effect.

Baby boomers are particularly at high risk for having the disease, particularly those who have had blood transfusions or organ donations before 1992 or spent time in the military. Various studies in Veteran Administration have shown a Hepatitis C prevalence rate of between 5% and 22% among military veterans. It is believed that field bleeding, surgeries, transfusions (before 1992) and exposure to blood by military medics and surgeons constitute for the high infection rates in the military, particularly among veterans of foreign combat.

Nicholson insists that being cured of the disease is well worth the torturous side effects many patients will experience while on treatment. He stresses that keeping a “Positive Attitude” is highly important for patients who are undertaking treatment for the potentially fatal disease. Ending this Hepatitis C update are a few points for Hepatitis C positive individuals to keep in mind while on therapy: