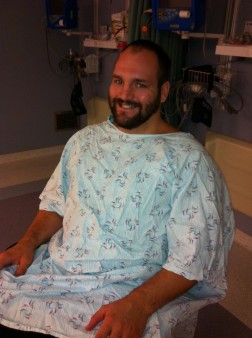 This Incivek “Triple Therapy,” still in the experimental phase for Nicholson’s genotype (type 2) has been a long battle. The most common side effects Devon has regularly experienced have been itching, rashes, fatigue, flu-like symptoms, memory and cognitive problems, weight loss and insomnia. As there are numerous potentially deadly side effects associated with the “triple therapy” medication regime Nicholson considers himself lucky.

Devon his happy to be done treatment and hopeful that he will achieve a Sustained Viral Response (SVR) and be declared permanently cured of the virus 24 weeks post treatment. He isn’t getting too excited just yet however as his first treatment was unsuccessful at getting an SVR despite testing negative during treatment (see first treatment video at bottom of page.) Nicholson took more medication for a longer period of time at a higher dose for this therapy so he is confident he will receive good news regarding the SVR in December 2013.

Nicholson posted this message on his official Facebook page on June 25, the day after he took his last dose of the powerful drugs with chemotherapy like side effects:

"Below is my final Experimental Hepatitis C treatment video filmed today. Thank you to everyone who helped me get through the toughest 36 weeks of my life and accomplish my goal of completing the entire therapy. I am very grateful to have been given the opportunity to take these medications. I will find out if I am permanently cured later this year.

Thank you in particular to my family, girlfriend Laura, the Ottawa Hospital, Wayne “Superstar Billy Graham” Coleman, Dr. Hector Rodriguez in Phoenix, my insurance company, Service Canada, Maximilian Moskal and everyone who has helped me along the way. I appreciate everything and thank all the followers of my videos for the support and nice comments. I could not have done this by myself.

It’s going to take 2-4 weeks for the side effects to dissipate. I’m looking forward to getting back to my regular training."