Hepatitis C: One bourbon, one scotch, one beer

As far as I was concerned, my liver was this organ inside my body that just WAS. It sat there, doing its liverish thing, while I bombarded it with vodka. And gin. And wine. Knowing what I know now, I can just imagine how much it hated me, how much it would shrink in fear as the first wave of alcohol hit its already compromised cellular structure. If it could speak, I’m pretty sure it would have said

“Geez Louise, do have have any idea that you are KILLING YOURSELF?” 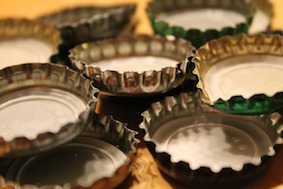 I drank almost every night. I didn’t drink a lot, just a glass or two, but it was more likely that I’d have a drink than not. And every now and then I’d go out, or go to a party, or a gig or performance and drink much more than I should. Want photos of me wading barefoot in a fountain at 2 in the morning? I’ve got ’em. Sitting in an abandoned armchair in an alley in inner Sydney with friends holding forth about life, the universe and everything? Check. Dancing at some crazy festival somewhere? Yep.


I didn’t think I had a problem with alcohol, but I couldn’t imagine life without it. The whole time I did it I had no idea how much damage I was doing.

How could this possibly have escaped your attention, I hear you say disbelievingly.

Easily. You have to remember, I had no symptoms, no signs. Nothing to indicate I was placing my liver at risk. I didn’t have a regular doctor and only ever saw one for emergencies, so it never really came up. I didn’t see a GP from 1995 until 2007. There was nothing in the media about hepatitis C.

Until one day I acquired a GP I liked and trusted. This was in 2011. I told her I had hep C and she immediately started running tests and wanting to refer me to the gastroenterologist in town. She looked at my LFTs and my viral load and told me to cut back on drinking. Keep it to one a month. One a month? I’d be better off quitting, rather than counting down to an “Alcohol Day”.

So I did. Stopped drinking. Cold turkey. Never looked back. Do I miss it? I’d be lying if I said no. There are times when I come home from work and I’d love to have a glass of wine. Can I keep it up? Sure I can. It’s been three or four years now, why waste all that effort? I quit smoking the same way. One day it’s just not worth it any more, so you stop.

I’m not much of a  one for advice (which you probably find hilarious to read, because all I seem to do here is offer it!) but if I could say ONE thing to people with hep C it would be “don’t drink”.

I did nothing until it was too late. I kept drinking because I didn’t know any better. I treated my robust good health like it would last forever. I squandered my health, my longevity and my resilience.

You don’t miss something until it’s gone.