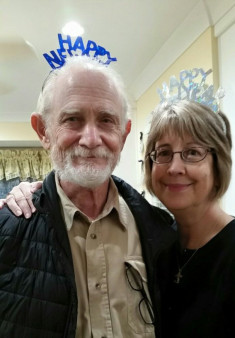 Connie: John, Thank you for being with us this week and sharing your awesome story of how you’ve come through this battle with liver disease. I know your story will bring great hope to others.

Connie: What year did your doctor tell you that you needed a liver transplant?

Connie: What tests were done to determine what stage you were in?

Connie: What stage and condition did you have prior to liver transplant?

John M.: I had completed Hepatitis C treatment using Harvoni in November 2014 which cured the Hep C but I still had chronic stage 4 cirrhosis.

Connie: Did you develop cancer, tumors/cysts? If so, did you do surgery, treatment or any procedures?

John M.: Yes, cancer was detected during one of the many MRI’s and CAT scan’s. I went under Therasphere radiation. The procedure was a lot like an angiogram, with the exception that instead of a stint, they placed a miniature vial of radioactive glass beads close to the tumors. I had to undergo this procedure three times, but it bought me enough time to line me up for a liver transplant.

Connie: What was your MELD score prior to transplant? What state in the U.S. do you live?

John M.: My MELD score was 38. This pushed me to the top of the lists in my region, which is in Utah.

Connie: How long did you have to wait for your transplant from the time you were put on the transplant list?

John M.: I was on the transplant list for 2 years.

Connie: When did you receive your liver transplant?

John M.: It was touch and go. I had been admitted to the hospital with very damaged esophageal varcies which was severely compromised. I was expelling copious amounts of blood. The doctor was able to band ten of the veins and I was allowed to go home for about 36 hours when it started all over again. I was readmitted on the 4th of November and spent the next 16 days in I.C.U. waiting for a liver, which I received on Nov 20th.

Thank you John. You are indeed a brave and courageous warrior. We look forward to hearing the rest of your story about your recovery and progress in post liver transplant.

Should People With NAFLD or NASH Be Monitored for Liver Cancer?