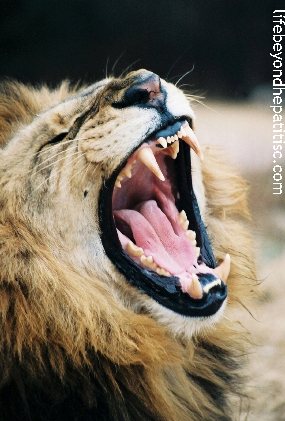 No matter where you are in the battle with Hep C, you can conquer the giant of fear. Fear can be gripping, dominating, paralyzing our thoughts and actions. Our giant wheels it like a whip..

God reminds us in His word, “For God did not give us the spirit of fear, but a spirit of power, of love and a sound mind.” 2 Timothy 1:7 NKJV

So who are we up against when fear bellows out doubt, dread, worry, anxiety and launch’s the attack of the ’what if’s’? Its Goliath’s brother sending a borage of despair, beating us down until we have a defeated mentality. The giant of fear is every bit as real of the giant of Hep C. Learn to recognize and discern his ugly voice.

Mr. Fix-It and I were driving to my doctor’s appointment one morning right before I was to begin the triple therapy. I was stricken with dread, my thoughts began to drift toward ’what if’s.’ I sinking lower and lower.

I keep the radio station in my truck on a Christian station and the song, “Your Great Name” by Natalie Grant began to play. When I heard the words to this song it was as if I was hearing the battle charge from God. I lifted my countenance to see the victory flag flying. The message rang out loud and clear, Nothing can stand against your great name. Nothing!

The assault to my spirit had already begun on the way to the doctor by Goliath’s cowardly brother who lurks in the shadows. He was doing his best to get me to believe, you are going to lose this battle.

I remember whispering, “God is my strength and my fortress, nothing can stand against Him.” Fear folded its tent and left defeated. No more echoes of despair or dread. I was lifted up and fortified with God’s strength.

I hope you will recognize when Goliath’s brother shows up and not allow him to throw darts of fear and despair your way. I encourage you to use the Sword of the Spirit which is God’s Word. Ephesians 6:10-18 explains the Armor of God.

Turn up the music my fellow warriors and Armor Up!

Our featured scripture and song this week is 2 Timothy 1:7 (see above) and “Your Great Name” by Natalie Grant.

Can you identify dealing with fear, and dread in the battle with Hep C?

This entry was originally published on Life Beyond Hepatitis C August 12. It is reprinted with permission.