Hep C Activism: How to do it properly

Twitter
Facebook
Pinterest
Tumblr
Email
Advertisement
There are Hep C advocacy groups in nearly every country. In the countries that are big market places for Hep C drugs these advocacy groups get a huge amount of their funding from Big Pharma, from companies like Gilead and Bristol Myers Squib and others.
It is a bit like the Mexican drug cartels funding the police force... there can only be one outcome.
So if you want to by-pass the so call advocacy organisation and make a real difference in your country there is a simple formula that has been developed here in Australia and proven to work effectively. It requires two people who have a little courage and are prepared to take a risk.
One of these people should be a person with Hep C and the other should be a medical doctor. A general practitioner or a specialist.
The person with Hep C has to import generic Hep C meds and go public about it.
Go to the news media about it. Television, radio, newspaper.
So it would be best if the person with Hep C had existing media experience or if someone with media experience could give some help in this process that would be good.
Bombard the news media in your country with press releases about how many people are dying because of Hep C in your country, how the greed of companies like Gilead is killing people. How many billions of dollars Hep C costs the health system in your country.
The news media love the story about how much a tablet of Harvoni costs to make and how much Gilead sells it for. Cost is about 40 cents a tablet.
Then the doctor has to also go public about prescribing generics. It has to be a doctor with courage. A doctor who cares more about patient’s health than their career prospects or peer group approval.
A doctor who cares about people being cured of a curable disease rather than how much money he might lose if he gets in trouble with the medical board.
A doctor with a conscience.
The doctor has to team up with the Hep C sufferer and support their media campaign. Together they become a very news worthy couple.
As the news media coverage increases so people with Hep C begin to actively seek a cure through generic Hep C medicines and more and more doctors will begin to prescribe generic Hep C medicines.
This happens very fast.
In Australia in just six months this went from not very many patients ordering generic treatments to hundreds every week.
In Australia when  Dr Freeman and I first started our campaign, it was very difficult for patients for find a doctor who would prescribe or monitor generic Hep C treatments. Six months later almost every major Liver Clinic in Australia was prescribing and monitoring generic Hep C treatments and every second doctor was doing the same.
Of course the effect of all this is that Gilead and the other drug companies could see that soon there would be no-one with Hep C left in Australia to sell their grossly over-prices medicines to.
This meant that to get a piece of the action they had to lower their prices to almost generic levels. So now in Australia everyone with Hep C will have access to Hepatitis C treatment at almost no cost.
This same formula will work anywhere, in Canada, in the USA, in the UK, in Ireland, in Brazil, in Japan. Anywhere there is a problem with Hep C.
If you think you can do this write to me and I will be happy to help you with press releases etc.
Try to get a Hep C patient and a Doctor if possible but if you can not get a doctor do it anyway.
Look here it is already happening in New Zealand and in less than 12 months I will bet that New Zealand has a very good deal worked out with the drug companies to supply Hepatitis C drugs like Harvoni and Sovaldi at very cheap prices.
Be the one who changes things in your country and give Gilead a kick in the balls while you are at it! 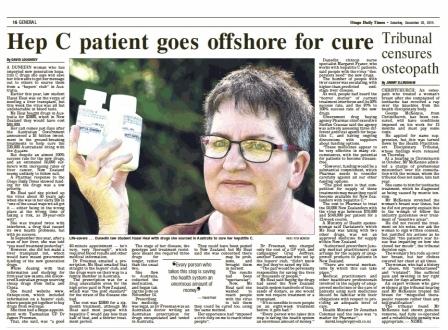