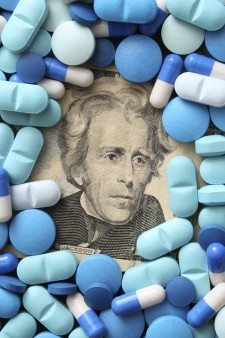 Twitter
Facebook
Pinterest
Tumblr
Email
Advertisement
As many of my readers would now know Gilead has successfully appealed against the rejection of its patent for Sofosbuvir.
Not content with making a couple of dollars royalty off each licensed generic Harvoni and Sofosbuvir manufuactured and sold in India Gilead felt the need to gain total control over Indian production of generic Hep C medicines.
Whilst many people are dissappointed in this decision by the Indian High Court not many people are surprised.
There are a combination of qualities that seem to be a regular feature of Big Pharma’s methods of doing business, of crushing opposition, all of which work well in the Indian environment. These are:
1. Vast amounts of money
2. Huge political influence
3. Basic old fashioned corruption
4. Bullying
5. Threatening or conducting legal action
It would seem likely that all these approaches to solving problems were used in Gilead’s patent application and successful subsequent appeal.
So the big questions is how will the  Indian reversal of its position and allowing the patent for Sofosbuvir to be granted effect supply and availability of generic Hepatitis medication from India?
I have spoken to a number of my friends in India and the truth is that no-one is really sure about what will happen next except for one thing, that is that the price will no longer continue on a downward trend.
Will the price of Indian Generic Harvoni and Daclatasvir rise? Will there be a decrease in production?
Again we do not know.
I would expect the most likely outcome is that Gilead will try to block the supply of generic Hep C medicines from India to western countries like the US and Europe.
One thing that you can be sure of is that Gilead has only one interest, and that is maximising profits at any cost.
Gilead is a ruthless profit making machine and it will do what it can to remove anyone or anything that obstructs its quest for greater profits.
If you have been considering starting the treatment of your Hepatitis C with Indian generics I would not delay making a decision soon.
For the complete story on Gilead and its Sofosbuvir patent in India please follow the link below and be prepared to read of a story of humanity at its worst.
In the future, in a time when humanity has risen above greed and corruption, the people who now run Gliead will be remembered in the same way as Hitler and the Nazis and other groups and individuals who have been responsible for the deaths of millions of humans, of massive genocides. Every year hundreds of thousands of people die and millions of people grieve at the loss of fathers, mothers, sisters, brothers and children who have died needlessly simply because of Gilead’s greed.
Click this link to read the complete story of Gilead’s Patent appeal.
http://www.caravanmagazine.in/vantage/indian-official-rejected-gilead-patent-forced-out
Advertisement