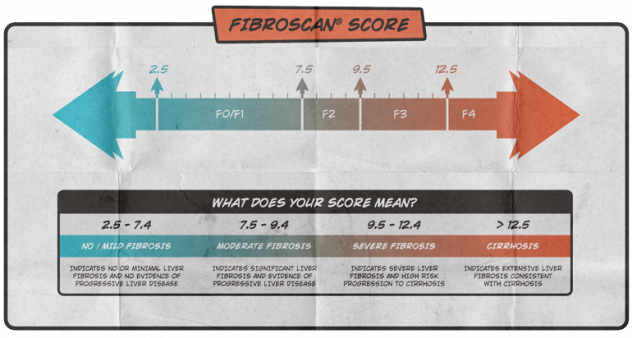 Understanding the Fibroscan score: F0 is no Fibrosis and F4 means that the liver has Cirrhosis

What is a Fibroscan

Fibrosis, Cirrhosis and the Fibroscan

At least once every week I get an email or FB message from someone whose doctor has booked them in for a liver biopsy to check their liver fibrosis level. From the start I want to state quite clearly that liver biopsies are not needed to determine liver fibrosis or cirrhosis.
Knowing the fibrosis level, and whether a person has cirrhosis, or not, is helpful for determining how Hepatitis C should be treated. Simply speaking the higher the fibrosis level the longer the treatment time. This is perhaps an over simplification however I will deal with this in more detail further along.

Over the past couple of years the Fibroscan has become the thing that almost everyone turns to in order to know the fibrosis level of their liver. The Fibroscan has replaced the liver biopsy as the best method of determining liver fibrosis. It is a very effective tool but there seems to be a lot of misunderstanding about how it works and how to interpret the Fibroscan results.
At EASL this year the manufactures of the Fibroscan had a stand there attended by a number of their experts. I was fortunate to be able to spend a considerable amount of time speaking with their leading expert on how the Fibroscan works. So, in this post I will try to explain, in simple terms, how the Fibroscan works and why it makes liver biopsies totally unnecessary.

What is a Liver Biopsy and why were they needed?

So first a little history.
For Hepatitis C treatment the purpose of a liver biopsy was to determine the level of liver fibrosis. In the case of Hep C liver fibrosis is caused by the Hepatitis C virus destroying liver cells and thus creating scar tissue. The Hep C virus “breeds” by invading a liver cell and using the generic material inside the cell to replicate itself. The virus’s presence then causes your liver cell to “explode” sending new virus particles into your blood stream where they hook onto other liver cells, invade them and repeat the process. If you have Hep C this process is happening all day every day.
There is no such thing as “dormant” or “inactive” Hepatitis C, if you have Hepatitis C it is doing some level of damage to your liver every day.
For some people this level of liver damage is low and the liver is able to heal and there is not much scar tissue formed. However, over time the scar tissue will increase. The scar tissue in the liver is like the scar tissue from a wound to a muscle, it is harder, less flexible, than the surrounding tissue. As the amount of scar tissue in the liver increases then liver becomes harder and less flexible. This is fibrosis. Fibrosis is rated from F0 to F4. At the bottom end F0 means no fibrosis (or so little as not to worry about it) and at the top end F4 means a person has cirrhosis.
If you have cirrhosis it means that your liver is pretty much a big mass of scar tissue. With cirrhosis comes increased chance of liver cancer or liver failure and death. (I was border line F3/F4 when I started treatment).
Until relatively recently the way that fibrosis level was determined was by a liver biopsy. This involved inserting a hollow needle into the liver and removing a “core” sample of the liver tissue. A biopsy is an invasive surgical procedure, that is often painful and can sometimes lead to serious complications.
Because any form of surgery is both costly and risky the Fibroscan was invented as a means of determining liver fibrosis without the need for surgery.

Click here to read the rest of this blog, including information on interpreting Fibroscan and see photos of the procedure. 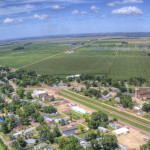