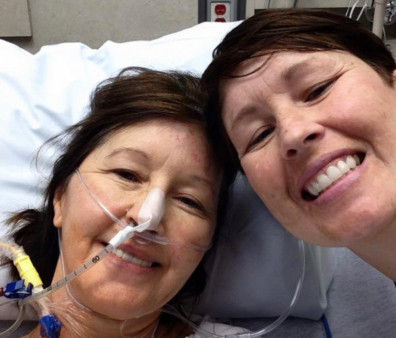 I love this girl so much.

If I was going to make it, there was some work do. We found out that the whole family was going to need healing with my liver cirrhosis.

Karen Hoyt is a blogger who has a story about hepatitis C, cirrhosis, end-stage liver disease, liver cancer, and liver transplantation. This excerpt first appeared on Karen’s I Help C blog.

When my liver failed in 2010, I was pretty much toast. I had been for a long time without understanding why, or what was going on. See, my liver enzymes were in the normal range right up until my liver failed. I had hepatic encephalopathy, and yet was out cycling and jogging in the August heat. Liver failure is just what it sounds like. I hit the hospital door and didn’t come out right away. Instead, I ended up trying to say goodbye to my kids. If I was going to make it, there was some work do. Also, we found out that the whole family was going to need healing with my liver cirrhosis.

Sure, I was fighting to live for myself, but honestly, I didn’t want to leave my kids without my support. Seeing the grands graduate, and then head off into their adult lives became a focus for me. Because I was constantly sick for the first 2 years while on treatment, I kept up a false front. I was giving myself Procrit injections in the bathroom. The little one even helped me “push” the plunger during some interferon injections for Hep C. I felt that if my family saw my journey, two things would happen. Number one, they would be less scared of my liver cirrhosis. Number two, they would be prepared for my death.

My daughter had the hardest time. She ended up being my personal caregiver. (messy parts) The pressure was hard on her. After finishing her master’s degree, she put her career on hold to help keep me propped up. We became so close during that time, but it also tested our relationship. Nobody wants to have, or to be, a full time caregiver. There wasn’t another person on earth who could have done it like she did.

Now she’s got a job she loves teaching at a university. The grands are happy and still tender hearted with Nan. We almost got too close when I was sick. We piled up and slept together, went to movies, attended concerts, and I got to carpool kids to lessons and sporting events. Now we’re almost a regular family. Not normal, because who wants that? I’ve got a young man’s liver tucked under my ribcage. There is nothing really normal about what we’re going through. But you know what? We are just a regular family who faced a lot of problems together.

This fall, I’m heading to Philadelphia to meet some of our hepatitisc.net friends from Health Union. But the week before Philly, my daughter and I are going to escape to New York City. We deserve this. She deserves it. After almost a decade of Hep C and then recovering only to get liver cancer, we’re tired. We want a vacay. Just me and my only daughter. Family healing after liver cirrhosis is a part of our journey.

To read the rest of this blog, click here.