There is a very real cost to the public when Facebook execs decide what can and can’t be promoted to its billions of users.

The piece titled “Facebook’s Hands-Off Approach to Political Speech Gets Impeachment Test” reported that staffers with the campaign of Democratic presidential candidate Joe Biden asked Facebook to take down a Trump campaign ad they said was full of false accusations.

The NYT piece went on to say:

In a letter to the Biden campaign, Facebook said the ad, which has been viewed five million times on the site, did not violate company policies. Last month, the social network, which has more than two billion users, announced that politicians and their campaigns had nearly free rein over content they post there.

It went downhill from there as the company’s cofounder and CEO, Mark Zuckerberg, testified before Congress that Facebook basically allows politicians to run false ads on the platform.

In case you missed it, watch the revealing exchange between Zuckerberg and Representative Alexandria Ocasio-Cortez below:

As news was breaking about Facebook’s stance on political ads, the company was busy blocking campaigns running on HepMag.com and our sister site POZ.com.

What was blocked? A post about actress Pamela Anderson announcing to the world she is hepatitis C–free and a slideshow about celebrities who have lived with HIV.

What could possibly be Facebook’s reason for blocking our ads? The note from Facebook in both cases said the the boosting of the posts was being blocked because they were “Low Quality.” 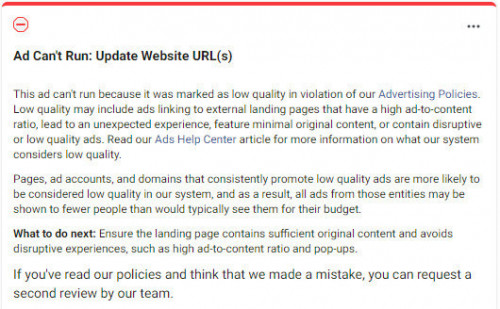 At first, we thought maybe it was just a mistake on the part of some Facebook autobots, but no. A manual review by the social media platform had deemed both posts unworthy of Facebook boosting.

We then tried boosting them as political ads. As POZ recently reported, Apicha Community Health Center had its ads promoting PrEP temporarily blocked because they were deemed political. That wasn’t it either, as both our posts were rejected again.

The Facebook notice we received lists suggestions for getting the ads reinstated, including “ensure landing page contains sufficient original content and avoids disruptive experiences.” So we revisited the content.

We didn’t see anything out of line. We weren’t lying like some of the political ads approved on the platform were. Not too many ads. Plenty of interesting and engaging pictures and text. Plus, plenty of other publishers were boosting similar content on Facebook.

So now we’ve landed in this very uncomfortable place. Our posts featuring Baywatch star Pam Anderson and Robert Reed (aka Mr. Brady) are battling Donald Trump political ads on Facebook and losing badly. But the real losers here are the folks who haven’t heard Pam’s story and could be cured in as little as eight weeks of treatment for their hepatitis C.

Whatever side of the political fence you’re on, there is a very real cost to the American people when factual information loses out to the whims of Facebook executives deciding what can and can’t be promoted on a platform that billions of people use every day.