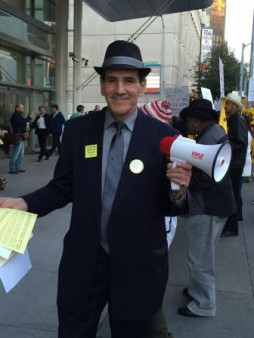 The Death of a Champion, Hepatitis C Advocate Orlando Chavez

Long time hepatitis C activist and advocate, Orlando Chavez died from a massive brain hemorrhage on June 3, 2018 in Oakland, CA. His death is an enormous loss to our community, and one that I feel deeply.

It is hard to organize my thoughts about Orlando’s passing, so I spent some time looking over what Hep has recorded about him. In 2014, Editor-in-Chief Oriol R. Gutierrez Jr. titled his editorial, ‘We are the Champions.’ The Winter 2014 issue of Hep magazine features the Hep 10, ten men and women who toiled mightily while advocating for people affected by hepatitis C. Orlando Chavez was one of those champions. You can read about him and the nine other advocates by clicking here.

My favorite piece about Orlando was the one he wrote himself for Hep Stories. Diagnosed with hepatitis C in 1999, Orlando’s start as a patient grew beyond that. Describing his journey to becoming an advocate, Orlando writes, “I kept attending the OASIS support group for the fellowship and education. I decided to put activism, advocacy and awareness at the top of my list. The way to keep what I have is to give it freely to others. I pay it forward and I truly hope others who have so much to give do the same.” I encourage you to read the rest of Orlando’s Hep Story, especially the Q and A portion.

Orlando and I crossed paths many times over the years, but the moment that stands out most for me is in 2015 when we stood together protesting Gilead Sciences pricing of Harvoni and the cuts Gilead made to its patient access program. Orlando stood strong, committed, and focused. He knew right from wrong and spoke passionately about the need for justice in the health care system. Yes, he was a champion to many.

He’s helped many people over the years and leaves a legacy of justice, passion, and hope. Thank you Orlando, thank you.