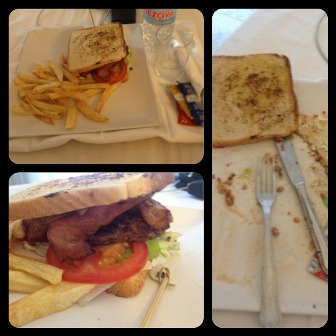 At the hospital they said my viral load had doubled while I was on the placebo. Ivana agreed that there may have been something toxic to me in the placebo which caused my skin and hair to react like they did. On the Gilead trial there have been 5 people who had to be taken off because their ALT’s were so high. They were all on the placebo.

After the hospital I went to the airport. Louie came to carry my bag because he’s a good son. My flight was on time. With enough coffee in me I was starting to feel OK.

I got to Ibiza, switched on my phone and it said invalid sim. No internet, no phone calls, no texts then. I arrived at the villa about 7.30pm.Half an hour before pill time. There was no food in the house. I was starting to fade but I had to go to the supermarket. The supermarket was one step too far and I literally crawled back into the house.

Back at the house the internet wasn’t working. Pushed over the edge I didn’t have the strength to make myself the food I’d bought so I lay down. This morning I had to get up early and go to an internet cafÃ©. By now I was feeling so ropey that I was shaking. I arrived at El Gran for meetings, started to cry and couldn’t stop. Someone lovely made me lie down on a bed. I was able to work and rest a bit. I missed a meeting though. I’ve booked into a hotel tonight with internet as I need to be constantly on it here. My phone is still buggered but I’m too tired to care.

The pic is of the burger I ate when I got to the hotel. Those of you who know me well will know I never cry and I never eat this kind of food. You’ll be reeling at the revelations in this blog.

This entry was originally published May 21, 2013 on The Hepatitis C Trust. Reprinted with permission