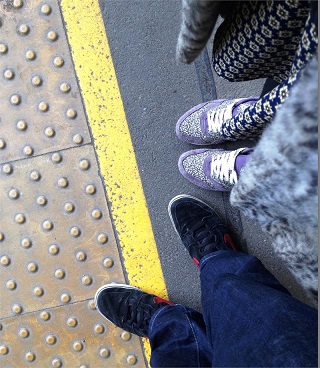 Today was a clinic day. My son Louie came too. He was getting his 48 week post treatment blood test. I’ve never spoken about his hep C publicly but now he’s 19 and clear (fingers crossed) it’s OK to. When I finished my treatment in 2005 he started his 3 months later. While I was still making Louie, Me & Hepatitis C, he was doing his treatment. He was taken off it after 7 months because his viral load hadn’t budged. He did the phase II AbbVie trial last year and went clear in the fifth week. He has stayed clear since. I need to be clear by now to continue on the trial.

We asked Ivana why some people relapse after 24 weeks. She said that while the virus may have disappeared from your blood, there may still be some in your liver. If your immune system is weakened from drinking alcohol or not looking after oneself then it could replicate and cause you to relapse. The main reason for relapse is not taking your drugs at the right time. I also asked why I feel so awful when, at this point, I could be clear.

She said that my immune system would be working hard to rid my body of the virus and I’d have high levels of cytokines and chemokines which would be making me feel rubbish. The side effects of the drugs don’t help.

So a significant day for me and Louie. Our hospital appointment landed on the same day by pure coincidence. Today’s pic is us at the train station after the hospital. I think it conveys a sense of camaraderie.

By the way, Louie says everyone will think I’m mad as I take so many photos of feet. Like I confuse soles for souls. He said my blog should be called Window to The Sole!

This entry was originally published March 26, 2013 on The Hepatitis C Trust. Reprinted with permission.