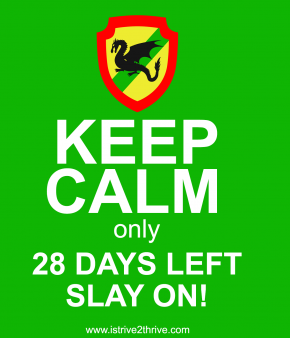 Well, it’s been a long winding road filled with twists, turns, bumps, setbacks, side effects, ER visits, doctor’s offices and countless needle sticks, but the end is finally in sight. Today officially marks my final 28 days of treatment on Sovaldi + Ribavirin (800mg). If some of you don’t recall, I’m a genotype 3a, with hemophilia and HIV. Having gotten both HIV and Hepatitis C when I was a child around age 2 or 3, it’s been an uphill battle both physically and mentally. Not only has this new “non-injection” Hepatitis C therapy been a blessing, but a breath of fresh air. I treated previously in 2006 on PEG-interferon and Ribavirin, only to go undetected around week 17 of the 24 week therapy, and relapse shortly thereafter 3 weeks post.

Living with Hepatitis C has been a constant drain on me physically, dealing with bouts of lethargy and minor digestive issues like acid reflux. Also, the psychological aspects have been draining as well, as the cloud of gloom and doom of my own mortality was left uncertain and unsolved. I don’t want to say I lived in the fear of the disease itself, but it definitely played a huge role in my overall outlook on life to some degree. For example, I was hesitant to even drink my own champagne toast at my wedding in fear of damage to my liver. Sure it’s only only a small glass of bubbly, but small things, special occasions and socially I knew there were boundaries in which I dared not to cross. But I did do the toast with my lovely wife on that day back in 10-10-10, and didn’t let that fear cloud the moment of joy and happiness with my wife.

Now, looking back over the past 5 months of my 6 month treatment, it’s been a blessing with this new treatment on Sovaldi. Yes, as you’ve read over the past few months, I’ve had my fair share of side effects, ER visits and stumbling blocks with insurance, but being cured is my prize at the end. Simply how I got on treatment has been divine intervention by God, as I technically shouldn’t even be treating right now. Since I’ve moved to Florida back in 2009, I’ve bounced from doctor to doctor, seeking treatment for my Hepatitis C, and some offered the old standard injection based therapy, but I waited for something better. From one doctor, to another, to another, I felt like a kid lying on the floor of a bounce house just tumbling and rolling on the constant waves knocking be back and forth. No progress, no forward motion and no treatment, until Sovaldi came along. I was originally referred to my current treatment doctor from a friend of a friend of a doctor, and basically she was my last hope. She informed me on December 3rd, 2013 that she was going to treat me on PEG-interferon and Ribavirin and to come back in 1 month to go over a treatment schedule of up to 48 weeks. I was not happy. Then on December 6th, 2013 Sovaldi was approved by the FDA and during my next visit the following month my doctor was ecstatic to put me on the brand new drug. By January, 14th 2014 the treatment was outlined, scripts were written for the medications and 5 days later was approved by insurance and on January 21st, I took the first pill to begin my 6 month journey.

As we count down these final 28 days of therapy to July 7th, 2014 together, I would like to take this time to thank all those who have commented, read and kept up with my progress over the past 6 months. Not only have you given me strength in low times, but your prayers and uplifting spirits have literally carried me through the roughest of times dealing with side effects and insurance woes. Keep them coming! I’m sure I’ll need them now more than ever as we approach the final 4 weeks of treatment. To those on the fence about treating, DO IT! What are you waiting for? Just because you feel okay now doesn’t mean you won’t be in the same physical state in a few months, or couple years down the road. Time does damage with Hepatitis C, and it’s nothing to take lightly, so treat now, and save yourself pain and misery in the future. This is just the beginning of my Strive 2 Thrive blogs, as we enter the post-treatment era, I’ll be blogging continually as this web site will be an ongoing resource and central location for my health, well being and that of others. We’ve only just begun!