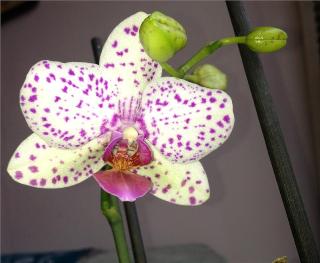 My orchid flowered today. Alan and Susan Raymond bought it for me last July. They came over to screen their film Lance Loud: A Death in an American Family at The Tate. I organised the event as part of my job at The Hepatitis C Trust. We thought it was the perfect vehicle to bring attention to HIV/HVC co-infection as Lance had been co-infected and died of hepatitis C.

The Raymond’s stayed for a week and did a lot of awareness raising for us including a radio day with Boy George. I enjoyed them being here so much. They were amongst the most interesting people I’ve ever met. Their films are outstandingly compassionate, empathetic and clever.

They give their subjects the space to tell their stories without ever controlling or directing the viewer.

I spent today with my family and got very tired pretty quickly, but that would happen anyway. I still think I can detect a bit of headache. I actually have no idea whether I’m on the placebo or not.

This entry was originally published on February 16, 2013 on The Hepatitis C Trust. Reprinted with permission.