Caution: Straight talk, no BS. Enter at your own risk.

Upon my return from a well-deserved vacation, there was a letter in my mailbox from United Blood Services. I remembered I had donated blood at a charity fundraiser where I had performed and there was a blood donation bus outside, a few weeks before my vacation.

Opening the letter, I was taken aback as I was informed that I had Hepatitis C. Further, the letter stated that I would no longer be eligible to donate blood, ever, and I was advised to make an appointment with my doctor. The date was September, 1999.

Doctor? What doctor? I was healthy, strong, athletic, self-employed with no insurance plan, and enjoying life. I had always been healthy and athletic. I hadn’t been to a doctor in years.
~~~~~~~~~~~~~

Soon thereafter, at church on a Sunday morning, I bumped into the wife of a good friend of mine. She was a pediatrician, and I told her of my diagnosis and asked if she could refer me to someone.

She stopped, looked into my eyes, turned my head and looked at my skin, and said “you’re not yellow or anything, don’t worry about it.” I breathed a sigh of relief.

Fairly soon thereafter, I made an appointment with a homeopathic doctor whose specialty was aging and longevity. He asked if I had any results from recent bloodwork, and of course I didn’t. He did say that I could order blood tests myself from a local lab (without a doctor’s prescription), and advised me to have a CMP (complete metabolic panel) and a liver function test done.

After doing so, I returned to see him, results in hand. He looked to see what my AST and ALT scores were, and explained that they were indicators of liver irritation, though not necessarily from HepC. He further explained that my numbers, though higher than normal, were nothing to worry about. In fact, he told me that I shouldn’t even give it a second thought until those numbers were in the 300-400 range. (“Normal” ranges were much higher then than they are now, and even so, I was above normal, in the 90-120 range with both numbers.)

So, having received advice from two doctors and a glowing report of good health from the homeopath, I went on about my life. I really didn’t realize the potential of the time bomb ticking inside of me.

Below is my promo photo, circa 1982, around the time I most likely acquired the HepC virus. 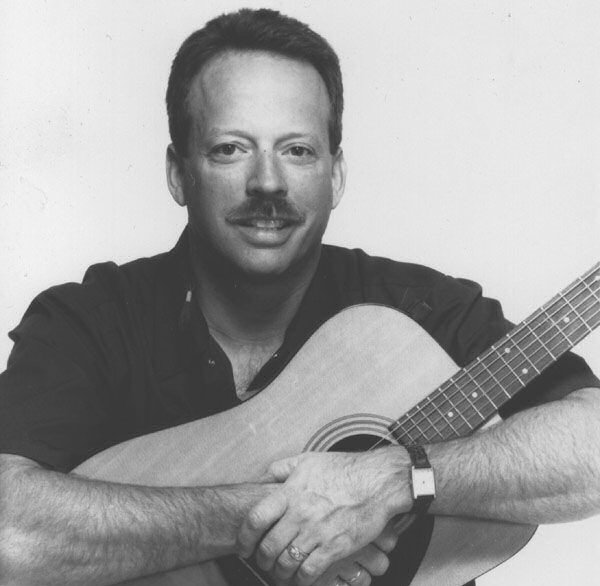 **(official disclaimer) Before I go any further, let me say that I am NOT a medical professional, I am merely a patient. As a patient, I also acknowledge that each patient is different. My writings, opinions, and recollections here are uniquely my own. You are different than I, and as such, your journey will be different, and hopefully, radically different.
~~~~~~~~~~~~~

You see, I’ve been to the edge. I’ve gone ’code blue,’ meaning I suffered cardiac arrest and flatlined, the inevitable result of not dealing with my HepC. Eventually, HepC destroyed my liver, leading to liver failure and end-stage liver disease (ESLD). The first time I heard the diagnosis of ’end-stage’ I suddenly realized I was really in trouble.

Due to the ever-encroaching effects of HepC, I’ve been revived by CPR three times. It’s not widely known, but only 3% of people that undergo CPR are actually revived. I’ve gone comatose four different times. There are lots of other complications, too. This blog is dedicated to my struggles with HepC, but below you’ll find a link to another blog wherein I talk about my life-and-death struggle with ESLD.
~~~~~~~~~~~~~

Now, as I write this, I am the proud owner of a fresh new liver as of June 2, 2015. I received the Gift of Life from an anonymous donor (who passed away) and his family, who chose to give an unknown someone (me) a chance to live on, even as they were experiencing, grieving, and emotionally reeling from the loss of their loved one.

My recovery has been going very smoothly and quickly and my life has suddenly changed after five and a half years on the National Liver Transplant Waiting List. My future is bright. I can begin to make plans again, and anticipate that I will be able to see them through to completion.
~~~~~~~~~~~~

So, back to HepC:

When I was first diagnosed in 1999, I was completely in the dark as to what was really going on. Now, in retrospect, having lived with HepC for the past 16 years, I know exactly what the dangers are and the possible worst case scenarios. I hope that you can live this harrowing journey through my writings and never have to experience the things that I’ve been through.


At this point in history, the number one cause of new cases of HepC is sharing needles during IV drug use. That stigma keeps many people from talking about the fact that they have HepC. Maybe that’s because of guilt or shame, but let me say this: it doesn’t matter how you got it.

Personally, I have three possible contraction points. Yes, one of them was a very short-lived experimentation with IV drugs. I didn’t like the experience at all and never returned to it after three attempts, although some of my friends were very enamored with it. The other two exposures were through sexual contact.

If you ask any well-informed medical professional, you’ll be told that sexual contact is NOT a common way to contract HepC, though it is possible, and is dependent upon a very specific set of circumstances. HepC is only spread through blood-to-blood contact and NOT casual contact. For contraction through sexual contact, both partners must have some sort of open wound, and an exchange of blood must take place. Personally, I’m not into rough sex, which is what that scenario seems to indicate to me.

Anyway, one girl that I lived with in the early 80’s contacted me sometime around 1993 and informed me that she had HepC, that the incubation period was frequently over 25 years, and that I should get tested. Of course I didn’t. A second ex-girlfriend had been a heroin addict a few years before I met her. I don’t know her current whereabouts or status, though I wish her well and hope she’s not dealing with it.
~~~~~~~~~~~~

Here I am, in the clinic, the staples freshly removed, 3 weeks after my liver transplant: 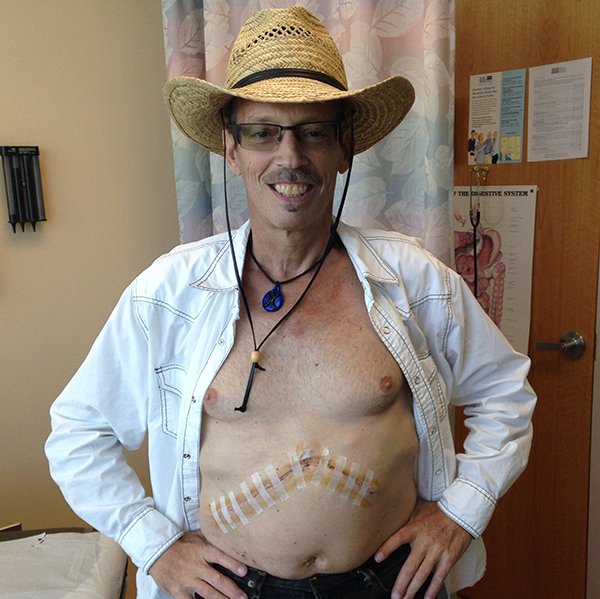 Today, at this point, I’ve been through HepC treatment two times. The first time was with the ’old-school’ treatment of Interferon and Ribavirin. That was a grueling 10-month-long treatment regimen that I endured in 2011, but largely because of my genotype (genotype 3, or GT3), it was unsuccessful. As a result, my HepC returned with a vengeance four months after cessation of treatment.

My latest round of treatment ended on April 17, 2015. Because of my genotype, my treatment consisted of the incredible breakthrough drug Sovaldi, coupled with Ribavirin. Because I have GT3, that was the best option at the time that I began what turned out to be a 36-week treatment program.

Unfortunately, a couple of hours before I went into pre-op for my recent transplant, I was informed that my HepC has returned. As of this writing, it’s again brewing inside me.

I know that sounds ominous, but in case you find yourself in my situation at some point, I want to leave you with my current attitude towards it, and hope that you will not let my situation, or yours, get you down.

1.) It took HepC over 30 years to ruin my last liver, and since I didn’t know that I had it I did absolutely nothing. I continued to go out with friends, have some drinks, etc. Now though, I have a new liver inside me now. At the age of 53, based on my track record, this liver should last at least another 30 years. (I say at least, because I no longer drink and am highly disciplined in my diet.) By then I’ll have lived WAY beyond all expectations, especially since doctors told me that I had only four months left to live back in 2009.

2.) By the time I’m physically recovered from my recent surgery just five more months from now, there will be more research data available, and probably newer and even more effective treatments available to me, even though my particular group of patients is getting ever smaller. (GT3, treatment experienced, with decompensated cirrhosis, and now post-transplant.)

3.) My latest treatment was almost devoid of side effects. I only say ’almost’ because the extended treatment period I just experienced (12 weeks longer than normal for my genotype due to my previous experience) is when the Ribavirin finally began to build to a crescendo, causing some nausea and loss of appetite. However, after having already been through interferon characterized by constant nausea, loss of appetite and extreme fatigue, combined with a weekly self-administered injection, eventually followed by another weekly injection of Procrit (for red blood cell production), followed by yet another weekly injection of Neupogen (for white blood cell production), PLUS Ribavirin, for nearly a year, the Sovaldi/Riba combo was a walk in the park.
~~~~~~~~~~~~~~

So, that’s all for now. I hope you’ll join me here on a regular basis, and I encourage you to drop me a note, ask me questions,  and put in your own two cents’ worth.

Also, if you want to learn about my current status as I travel through the post-transplant journey, I invite you to drop by http://dansperspective.wordpress.com where I’m currently writing about that experience as I’m going through it.