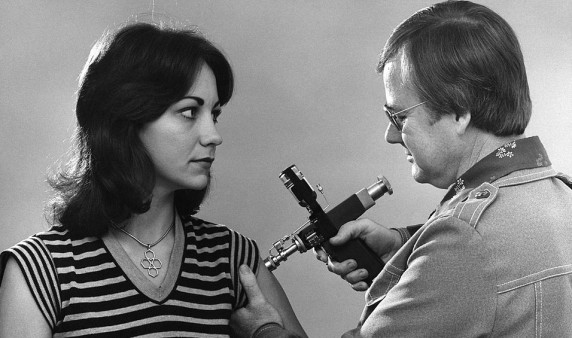 An adult female receiving a vaccination that was administered by a public health clinician, by way of a jet injector during the nationwide swine flu vaccination campaign, which began October 1, 1976. Centers for Disease Control and Prevention

Almost every day I see something written about how the so-called “baby boomers” have a high hep C infection rate because of their indulgent lifestyle in the 1960s and 1970s.

I also see lots of advertisements from the USA-based Big Pharma suppliers of hepatitis C treatments aimed at baby boomers.

But actually the whole “baby boomer” and hepatitis C thing is a crock. Baby boomers score high infection rates for hep C purely because hep C was only discovered in 1989 so “baby boomers” were the first demographic to get widely tested for hep C.

People born after about 1980 living in a developed country have a very low chance of being accidentally infected by hepatitis C because the medical and general health service community are so aware of it.

It was different for people born before 1980. No one knew about hep C so no one took precautions against it.

Why Does Hep C Advertising Target Baby Boomers?
In the USA, hepatitis C advertising targets baby boomers for one simple reason, they have a high disposable income and usually have good health insurance.

That was the case with me. I had unknowingly had hep C since the early ’70s but there were no symptoms until I turned 60. Obviously you do not get checked for hep C unless there are some symptoms. I had regular blood tests and general check-ups all my life but was never tested for hep C until symptoms appeared.

If hep C testing had started in 1950 that generation would have had just as much, or more hep C infections than the baby boomers.

If hep C testing had been done in 1890 the infection rates would have been double what they are now.

Because the most common way that hep C would be transmitted pre-1950 would have been unhygienic practices in dentistry and surgery.

High Hep C Infection Rates Around the World
The highest infection rates for hep C around the world are not in countries full of baby boomers but in countries that have pre-1980s hygiene practices.

In Romania, which has the highest HCV infection rate in Europe at about 5%, most of the infections come from dentistry and from tainted blood transfusions during surgical procedures. Yes, dirty needles contribute but it’s not the main cause.

In Nigeria, where the hep C infection rate is about 8% the high infection rate finds its major causes in local initiation practices combined with poor hygiene during dentistry and minor surgery.

No baby boomers in either of those countries.

What Percentage of Baby Boomers Have Hepatitis C?
In the USA about 1 in 30 people born between 1945 and 1965 have hepatitis C.

Among the general population of the USA, the HCV infection rate is somewhere around 1.5%.

So is the baby boomer infection rate higher because these people were all sharing needles to shoot up drugs?

Between 1945 and 1992 there was no testing for hepatitis C in blood transfusions. This means that anyone who had a blood transfusion over those years stood a higher chance of catching hep C than people born later, particularly in the USA where junkies could sell their blood to raise money for a fix. Selling contaminated blood was common in the USA during this time.

Mass vaccinations became prevalent in the USA during the 1950s and ’60s and the jet injector was the preferred weapon of choice for cheap and fast mass vaccinations. If a person served in the US military during this period they were mass vaccinated by a jet-vac, which is now acknowledged to have infected tens of thousands of servicemen and women with hep C. This was because of a factor called “fluid suck-back” occurs when blood left on the nozzle of the jet injector is sucked back into the injector orifice, contaminating the next dose to be fired.

Many people were also infected by the jet-vac or reused needles in school vaccinations.

Then there is dentistry, tattoos, ear and body piercing, etc., etc.

Interestingly we can not test people for hepatitis C who were born between 1900 and 1945 because if they had hep C they would have been dead long ago.

I suspect if we could test people born in the beginning of the 20th century we would find that they had a hep C infection rate of 3% or higher.

My guess is that if we could test people from the 19th century that we would find a hep C infection rate of more than 5%.

So the idea that baby boomers are responsible for their high rates of hep C infection because of their self-indulgent lifestyles is really a load of rubbish.

Hep C and Sharing Needles
According to World Heath Organisation figures, in the 21st century 25% of all new hepatitis C infections are the result of sharing a dirty needle.

P.S. I write this even though I am baby boomer and did catch hep C via sharing a dirty needle.

Greg’s blog is reprinted with permission, and the views are entirely his.

Nevada Budgets $6M to Treat All Prisoners Who Have Hepatitis C