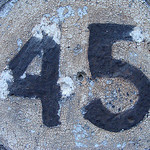 “Be bold and mighty forces will come to your aid”

I can’t quite get my head around that number. Firstly, I can’t believe it’s real. Secondly, I have no idea how they work it out. And thirdly, what do they look like, these forty five?

I’m thinking of naming them. Forty five of them.

I picture them as hold-outs. Hiding in a bunker somewhere, counting their ammunition, oiling their rifles. Plotting. Scheming. Moving around under cover of darkness. Hiding from the Ombitasvir cavalry, the Paritaprevir paratroopers, the Ritonavir gun ships, the Ribavirin infantry, the Dasabuvir bomber squadron.

My armies are bold. They are fearless. They will hunt down the forty five. They will show no mercy. They will shine a light into the darkness and flush out the remaining viruses. This is a fight to the death and I’m determined it won’t be mine. My armies will see to that.

I’m counting on it.