Plus: Buy a “Queer Blood America” work by artist Jordan Eagles, who fights the FDA’s discriminatory ban on blood donors.

Monday, June 14, is World Blood Donor Day 2021. This year’s theme is “Give blood and keep the world beating.”

Spearheaded by the World Health Organization (WHO), the day aims to raise awareness of the importance of donating blood and providing lifesaving blood and blood products, such as plasma, red cells and platelets, to people who need them. It’s also a time to thank the countless volunteers and donors across the globe—especially those who continued their efforts amid the COVID-19 pandemic—and to remind folks to donate blood to ensure there’s a safe supply ready for emergencies.

It’s World Blood Donor Day! Although we currently are not holding our quarterly SCC blood drives due to #COVID19, we thank all our SCC blood donor heroes for giving the “gift of life!”????????To find a #BloodDrive, visit https://t.co/SUeIgfwrJG. #BloodDonorHero #GiveBlood pic.twitter.com/uMYPcKz1dm

For many health care and civil rights advocates, the day is also an opportunity to battle discriminatory blood donation bans, such as those that prohibit men who have sex with men from donating blood, even when they are in monogamous relationships and are HIV negative.

In the United States, the Red Cross provides about 40% of the country’s blood and blood products, all collected by donors. On its website, RedCrossBlood.org, the group offers these facts about blood needs:

It’s World Blood Donor Day and gay men, bisexual men, and some trans people are still unable to give blood in Canada unless they are abstinent for three months. The blood ban is stigmatizing, unscientific, and it needs to end. pic.twitter.com/cUr2yHKNLX

Despite the need for blood donors, not everyone who wants to donate is allowed to do so. The artist Jordan Eagles has been creating works that raise awareness of the U.S. policy that requires gay and bisexual men, but not heterosexuals, to abstain from sex for three months before they can donate blood, regardless of their risk of having HIV and despite the fact that all donated blood is screened for diseases, including HIV.

Earlier this year, in an article titled “Fighting for Your Right…to Donate Blood,” POZ wrote about Eagles’s solo exhibit Can You Save Superman? II, for which he used superhero comics and blood donated by people with HIV and gay men on pre-exposure prophylaxis (PrEP). 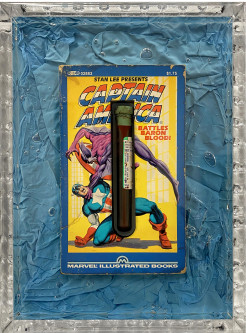 For World Blood Donor Day, Eagles created a new blood-comics work, Queer Blood America, that incorporates a Captain America book from 1982, the same year the Centers for Disease Control and Prevention first used the term “AIDS.” At that time, according to Eagles’s press material, Marvel comics followed a “no gays in the Marvel Universe code.”

Animations from the work will be sold as NFTs (non-fungible tokens, kind of like a one-of-a-kind digital artwork) on the Foundation app to raise money for Visual AIDS, which uses art to raise awareness of HIV, as well as the LGBT Center in Manhattan. You can learn more about Eagles’s project on QueerBloodAmerica.com, which includes an essay on superheroes, homophobia and queer bodies by art curator Ryan Linkoff. 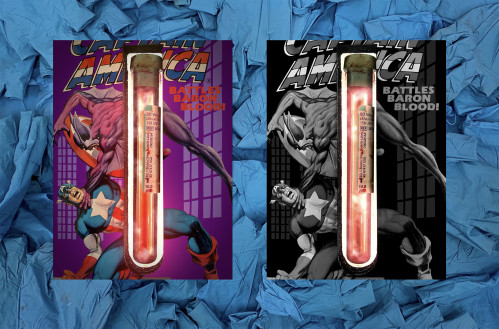 Returning to the larger themes of World Blood Donor Day 2021, the WHO states that this year’s objectives are to:

The WHO’s website about blood safety and availability includes these key facts:

In related news, read “Can Your Blood Type Predict Your Chances of Developing Illnesses?” and “Scientists Discover Way to Boost Universal Donor Blood.” You can also take the POZ Poll: Do You Know Your Blood Type?