In Women With HIV, Syphilis Is Tied to Hep C and Injection Drug Use

This finding follows a recent study indicating that syphilis is on the rise among heterosexual people who inject drugs.

A recent published study indicated that while syphilis rates are highest among men who have sex with men (MSM), rates are rising among heterosexual drug users. The U.S. rate of syphilis diagnosis among infants, known as congenital syphilis, doubled in four years and hit a 20-year peak of 918 cases by 2017.

Jodie Dionne-Odom, MD, of the University of Alabama at Birmingham presented findings from the new study on HIV-positive women’s risk factors for syphilis at the 2019 Conference on Retroviruses and Opportunistic Infections (CROI) in Seattle. She and her colleagues conducted a retrospective study of 4,795 women enrolled in the U.S. Centers for AIDS Research (CFAR) Clinical Network of Integrated Clinical Systems (CNICS) Cohort. The women all made at least one HIV clinic visit between 2006 and 2016. The investigators relied on medical records data, which included health outcomes about the women that were reported every six months. 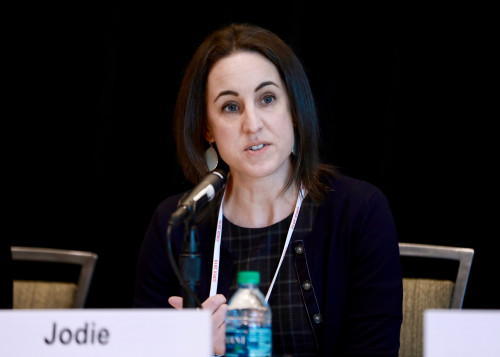 Of the 4,416 (92 percent) women who received testing for syphilis, 417 (9.4 percent) tested positive, and 119 of these were diagnosed with a new case of the sexually transmitted infection (STI) during the study’s follow-up period. This translated to a diagnosis rate of 7.6 cases per 1,000 cumulative years of follow-up.

The women tested for syphilis were followed for a cumulative 26,316 years. They had a median age of 47 years old. Sixty-four percent were Black, and 28 percent were white. Seventy-five percent had contracted HIV through heterosexual sex, and 18 percent had injection drug use as a transmission route. Thirty-six percent made their first CNICS clinic visit between 1995 and 2004, 36 percent did so between 2005 and 2010 and 28 percent did so between 2011 and 2016. The women made clinic visits during a median five different years and made a median three visits per year. Twenty-three percent were coinfected with HCV. Seventy-one percent had a viral load below 500. The median CD4 count was 529.

When asked at CROI why injection drug use was associated with a higher syphilis rate among these women, Dionne-Odom said the association was “likely mediated through transactional sex or other factors.”

Dionne-Odom and her colleagues have concluded that more research is needed to explore such a theory or other explanations. In the meantime, they recommend that guidelines prioritize syphilis testing among HIV-positive women who inject drugs in order to prevent mother-to-child transmission of the STI among pregnant women.

“Novel intervention studies are obviously needed to prevent syphilis infection in some of these high-risk women living with HIV,” Dionne Odom said.