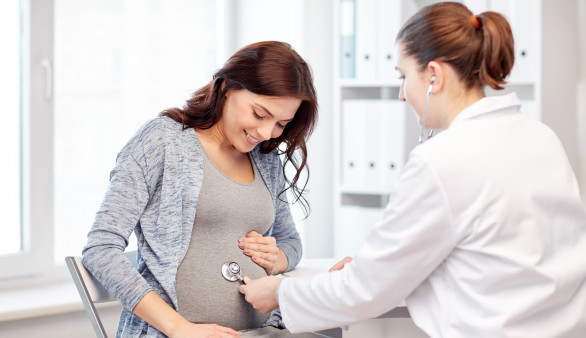 However, rates of persistent HCV infection at age 5 were lower than previously assumed.

Some 7.2% of pregnant women with hepatitis C may pass on the virus to their infants, a rate higher than previously reported, according to study results published in the journal Clinical Infectious Diseases.

Hepatitis C virus (HCV) can be transmitted from mothers to their babies during pregnancy or gestation. The risk of vertical transmission was previously thought to be around 5% to 6% in women with HCV alone; it is higher in those with HIV coinfection. But methods of measuring perinatal transmission are not firmly established, and this may be an underestimate.

Newborns at risk for vertical transmission are tested for HCV antibodies at 18 months. If they test positive, they are observed for up to three years. During this period, many will clear the virus naturally. At that point, they are tested for HCV RNA, which indicates active infection. If they test positive, they are then eligible for direct-acting antiviral therapy. But follow-up often fails, and many with active infection do not receive treatment.

Anthony Ades, PhD, of the University of Bristol Medical School in the United Kingdom, and colleagues reassessed data on 1,749 children born to women with HCV from three different populations to calculate vertical transmission rates along with estimated HCV clearance rates. The researchers analyzed rates of transmission early and late in utero as well as at delivery.

The rates of vertical transmission were 7.2% for mothers with HCV only and 12.1% for those with both HCV and HIV. After accounting for spontaneous clearance, rates of HCV infection at age 5 were 2.4% and 4.1%, respectively. Most transmission appears to occur later in gestation (66.0%), with some 24.8% occurring early in gestation and 9.3% occuring during delivery.

“Overall vertical transmission rates are about 24% higher than previously assumed, but the risk of infection persisting beyond age 5 years is about 38% lower,” wrote the researchers. They hope that these findings will influence trial design to prevent or cure hepatitis C in infants.