They began their national health summit in DC by honoring a trans woman recently murdered in Puerto Rico.

Organized by the Hispanic Health Network, the summit is organized around the theme “Our Health, Our Future,” according to a press announcement on HispanicNet.org. 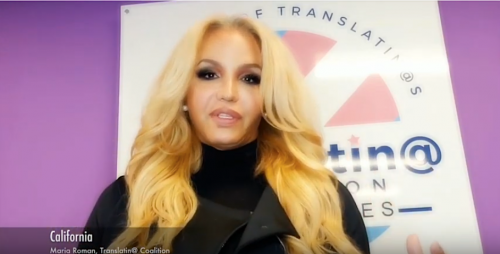 “The end goal is to produce an agenda, a health policy,” said Guillermo Chacón, president of Latino Commission on AIDS, in a video promotion for the summit (you can watch the video at the top of this article). “And the second thing is an implementation plan. We are going to monitor and make ourselves accountable or anybody that serves and provides health care services to the Hispanic population.”

Maria Roman of the Translatin@ Coalition added: “We are looking at a plethora of issues that affect us as Latinx people. As a trans woman, it’s important that I am here because many times when it comes to policy, when it comes to program development, I’m not included as part of the execution and development.”

Latinx (pronounced “la-teen-ex”) is a gender-neutral alternative to Latino and Latina.

Why hasn’t @FBISanJuan opened a hate crime investigation into the death of Alexa, a transgender woman in Puerto Rico who appears to have been falsely accused, vilified on social media, hunted, threatened by men who saw the social media posts, then killed. So far, no arrests. pic.twitter.com/aNJxJZvZQ5

The summit opened Monday morning with a moment of silence in honor of a transgender woman, Alexa, who was murdered the previous week in Puerto Rico. In San Juan, flags were lowered to honor Alexa’s memory, and on The Tonight Show, Puerto Rican singer Bad Bunny paid tribute to Alexa during a recent performance, reports The Washington Blade.

Wow. Bad Bunny (@sanbenito) wore a skirt on the @FallonTonight with a sweater that read “they killed Alexa, not a man with a skirt”
Alexa was transgender woman in Puerto Rico ridiculed & killed, on her birthday, by murderers who videotaped the crime & posted it on social media. pic.twitter.com/i2iBAmdVK5