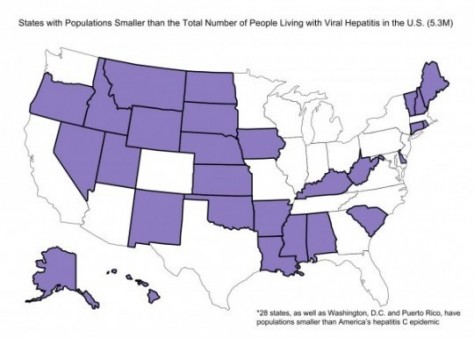 In March I had the honor of meeting with an inspirational group of advocates, leaders and researchers who had come to Washington to educate lawmakers about viral hepatitis and its impact on our nation. Their braveness and authenticity was moving. They told their personal stories about living with viral hepatitis, the frustrating experiences with healthcare providers, the challenges and costs of getting appropriate treatment, the stresses of waiting to receive a life-saving liver, the loss of loved ones, and other deeply personal issues.

I was deeply moved by their experiences and their commitment to improving the health of people at-risk for and living with viral hepatitis. These leaders came not to get better care for themselves, but to make things better for their friends, their family members, for their communities, and for strangers that they’d never met. They came to stand up for the millions of Americans living with viral hepatitis.

How Many People Are Living with Viral Hepatitis in the U.S.?

I’m not sure that most people appreciate how many people are affected by viral hepatitis. The CDC website currently states that an estimated 2.7 million to 3.9 million people in the United States are living with chronic hepatitis C virus (HCV) infection. Another 700,000 to 1.4 million people are living with chronic hepatitis B virus (HBV) infection. If we add these together, ignoring the number of persons coinfected with HBV and HCV, this suggests that there are roughly 3.4 million to 5.3 million people living with viral hepatitis in the United States. That’s a lot of people. These women, men, and children are at risk for developing severe liver disease if they do not get effective treatment and potentially transmitting the infection to others. Some estimates are even higher.

There May Be More People Living with Viral Hepatitis in the U.S. than Live in Your State

Let’s start with the lowest estimate from the CDC website (3.4 million people). Twenty-one states and DC all have total populations that are smaller than the estimated number of people living with HCV or HBV in the United States.

If we use the highest estimate from the CDC (5.3 million people), 28 states, DC, and Puerto Rico, each have populations that are smaller than the number of people living with viral hepatitis. That’s more than half of the states in the entire country. These states can be found all across the United States.

In fact, if you add up the populations of DC and the 6 least populous states (Alaska, Delaware, North Dakota, South Dakota, Vermont, and Wyoming), the total (5,184,139) is less than the CDC’s highest estimate of the number of people living with viral hepatitis in the United States.

These numbers of people living with HBV and HCV are much too large. We have an effective vaccine to prevent HBV infection. We have tests to diagnose HBV and HCV infection that are recommended by the U.S. Preventive Services Task Force and covered by most health insurances without extra cost to patients. We have effective treatments that cure HCV infection. And we have other effective strategies (including drug treatment and syringe services programs) that can prevent transmission of viral hepatitis.

We have the ability to reduce the number of persons living with chronic viral hepatitis in the United States by vaccinating people for hepatitis B, preventing new HBV and HCV infections, and curing people with HCV. We have the tools to make this happen starting today, if we scale up the use of effective prevention and treatment strategies. The Viral Hepatitis Action Plan sets goals for the nation and provides a framework for what needs to be done. We need to do better as a nation. We owe it to the millions of people living with viral hepatitis, their families, and their communities.