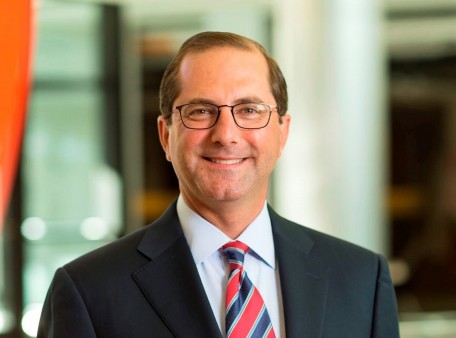 U.S. lawmakers say appointing Azar is like putting “the pharmaceutical fox in charge of the health care henhouse.”

Alex Azar, a recent pharmaceutical executive, is President Trump’s new pick to lead the Department of Health and Human Services (HHS), reports CNN. If confirmed as health secretary by the Senate, Azar would succeed Tom Price, who resigned in September amid a scandal over chartered flights for government travel.

Azar became the president of the U.S. branch of Eli Lilly & Co. in 2012; he left Lilly USA in January. Azar previously served in HHS, as general counsel and deputy secretary under President George W. Bush.

National HIV nonprofit The AIDS Institute released a statement in support of the nomination, but CNN reports that Azar has been accused of being complicit in drug pricing. In an October letter to Trump about bringing down drug prices, several members of the Congressional Progressive Caucus wrote:

“As a former Eli Lilly top official (most recently serving for five years as president of Lilly USA), Alex Azar has played a key role in creating the very pharmaceutical industry practices that you have pledged to end. During his tenure, Eli Lilly routinely increased drug prices—many by double-digit amounts.… At the same time, Eli Lilly is fighting against federal and state legislation to increase drug pricing transparency so that policymakers and the public can learn whether there is any justification for those types of increases on a life-saving drug first developed nearly 100 years ago. In 2016 alone, Eli Lilly spent $5.7 million lobbying Congress, the Department of Health and Human Services, and other administration agencies.

“Mr. Azar’s appointment would send a very clear signal that your Administration is happy to put the pharmaceutical fox in charge of the health care henhouse.”

CNN also reports that a lawsuit alleges that Eli Lilly fixed prices of insulin by increasing the price tag “in near lock step” with two other drugmakers.

In a tweet announcing the nomination, Trump wrote: “He will be a star for better healthcare and lower drug prices!”

Speaker of the House Paul Ryan tweeted that “Alex Azar is an experienced and highly capable leader who knows what it takes to tackle big challenges in health care. The Senate should swiftly confirm him as our next @HHSGov secretary.”

However, Senate Minority Leader Chuck Schumer, according to CNN, said Azar’s confirmation will be tough.

In its statement, The AIDS Institute wrote: “Alex Azar has the knowledge, expertise and leadership to oversee our nation’s health response. While we may not share some of the Trump Administration’s objectives relative to such issues as the Affordable Care Act and Medicaid, we believe a practical problem-solver like Mr. Azar is the right person for the job for this administration. He has been a dedicated public servant with additional leadership in the health industry who understand the importance of meeting the health needs of patients. He also values the role of the patient voice in decision-making.”

Azar is a 1991 graduate of Yale Law School, and he clerked for Supreme Court Justice Antonin Scalia. Before working for Bush’s 2000 presidential campaign, Azar was part of the legal team that investigated President Bill Clinton’s investments in the Whitewater real estate development and was led by Azar’s mentor, independent counsel Ken Starr.