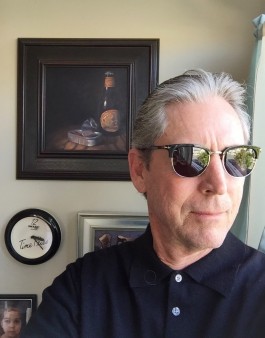 I noticed a hardness in my midsection. I didn’t worry because I assumed it would go away. A few weeks passed, and the condition seemed slightly worse. It had been a while since my last physical, so I decided to see the doctor. After explaining my concern, my doctor conducted his brief examination. To my surprise, he asked if I’d ever used intravenous drugs. I said, “Yes, around 35 years ago. Why?” He told me that my liver was enlarged and ordered blood tests.

The results showed that I had hepatitis C and cirrhosis. I was shocked. How could this be? Although I knew how, I still couldn’t believe it. There wasn’t a cure. My liver would deteriorate until it no longer functioned, and I would die. I was tormented by my youthful indiscretions, stupidity and arrogance. The anger and futility of not knowing I was sick until it was too late haunted me. Why would a virus wait 35 years to raise its ugly head?

I looked in the mirror and shuddered. This disease was killing me, yet I looked normal and vibrant. I felt cheated out of a good portion of my life. I didn’t do anything wrong. I was filled with worry and dread.

Time passed. There were more tests, more discussions about treatment, more waiting.
I wondered how death would come, hoping it would be sudden and unexpected. I knew that was unlikely, but I feared being feeble, lingering with eyes staring at me and reminding me of what I’ll miss.

Dying terrified me, but, paradoxically, it also had a calming effect. Simply put, all my other incidental manias and anxieties were trivial. I turned to prayer, invoking the prayer of St. Francis: “…grant that I may not so much seek…to be loved, as to love. For it is in giving that we receive.… It is in dying to self that we are born to eternal life.”

Nighttime was the worst. Sleep came grudgingly. It’s when I thought about the process of death, the blood flow dammed in my liver, nutrients never reaching their destination, toxins building and spreading, turning me yellow. Eventually, I slept.

Daily life went on. Family obligations and social functions provided distractions from my self-examination. Nevertheless, the reflection continued. I thought of the books I hadn’t read, the ideas I hadn’t said.

I began treatment with peginterferon and ribavirin. Constant injections and pills for a full year, with a success rate of maybe 30 percent. The side effects were significant. The earlier mental anguish was exacerbated by pharmaceutical-induced depression, fatigue, nausea, anemia and all manner of grumpiness. I tried to act normal or enthusiastic about others, but it became difficult to deny the depression and moodiness. At any rate, everyone— including me—weathered the storm. Unfortunately, the first blood test after completion of treatment showed high levels of the virus. So it was all for naught.

I was glad it was over. My attitude changed. I figured the slow pace of the virus would still allow me a relatively long life. I rid my psyche of negativity and focused on all that was positive. Grandkids. Exercise. Sons. Dear wife. Extended family. Nature. Goodness. Mindfulness. Humor. The list went on! I decided to get on with it, and I did.

I kept abreast of what was happening with hep C trials. I knew better drugs were in the pipeline. I lived my life like nothing was the matter. As 2014 drew to a close, Harvoni came on the market. It was exciting because the treatment was only one pill a day for three months. The success rate was nearly 100 percent.

I believe I was one of the early recipients. I was skeptical about my chances. But three months after completion, I reached the benchmark: The virus was gone, kaput, undetectable. I was cured!

I was 60 years old when this roller coaster ride began. My wife and I raised three sons, and they have given me four grandchildren. I worked all my life. Reminiscing about the random chaos of the late 1960s and ’70s and how I successfully survived, gives me peace of mind. Now, at age 68, I’ve won another bout and am pleased to witness my progeny and proclaim, “Hallelujah!”

Loving, loyal and skeptical, because I derive my greatest joy from my family and all its ramifications, including loyalty to each member. I’m cautious about all things relating to power and profit.

Without a doubt it’s my human legacy. As we speak, I’m watching my grandchildren develop.

My parents’ divorce and the subsequent disintegration of our family; the separation and struggles that ensued.

At this late date, not much. I’m at peace with most of my anxieties. My sons love me, so I can sleep easily.

Physically, the fatigue. Mentally (prior to treatment), knowing how I would die. Also, the stigma of drug use is a burden.

Let the ball game come to you!

My community is quite limited, but social media has helped immensely. The one person who sticks out is Lucinda Porter, an advocate informing tirelessly.

I’m retired, so I’m not driven by much, but I am driven by honesty. I strive to be honest, and I expect honesty in return.

In today’s world, I would grab my iPhone; all else is superfluous.

A hawk. Soaring is what I do best, albeit I never leave the ground—or on most days my living room. Hovering beyond harm has charm.