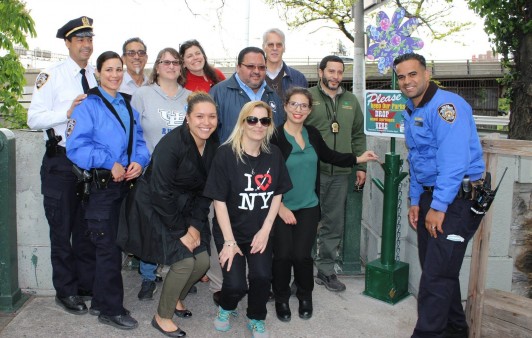 The unveiling of the first syringe drop box in a New York City park. Facebook/WHCP

This Syringe Drop Box Is So Cute!

And it will help keep an NYC public park safe and clean.

A public park in New York City just got its first syringe drop box, thanks to an effort spearheaded by the Washington Heights CORNER Project (WHCP).

Designed to look like a daisy, the syringe drop box provides injection drug users a place to dispose of their needles, which helps keeps the park safe and clean. It also encourages the use of clean needles among drug users, which helps fight HIV and hepatitis C.

According to a WHCP press release, the drop box is part of a six-month initiative developed with the New York State Department and approved by the New York City Department of Parks and Recreation and Manhattan Community Board 12.

The drop box is located at Haven Park, near 177th Street and Haven Avenue. During the past six years, members of WHCP have collected and disposed of more than 93,000 syringes. Most improperly disposed syringes have been found around the Washington Bridge in upper Manhattan, west of Haven Avenue.

For more about the work of WHCP, read the POZ article “Online Injectors.”