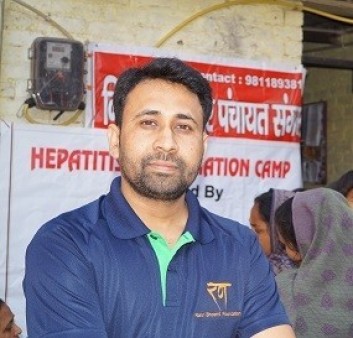 Diagnosed With Hepatitis B in 2010

I was diagnosed with hepatitis B in 2010, and it completely changed my life. My brother had tried to donate blood at work and was told he was infected. He told our family about the results and encouraged us to get tested. This is how my mother and I discovered that we were infected.

The day I was diagnosed with hepatitis B, I decided to raise awareness about this silent killer in rural as well as urban areas. Because infected individuals often do not feel sick for many years, there is little awareness about this disease, especially in rural areas of India. I knew we needed a massive awareness program to teach people how to prevent hep B.

I created a nonprofit organization called Rann Bhoomi Foundation and enlisted support from Max India Foundation to raise awareness and organize hepatitis vaccination camps in some of the poorest slums and rural regions of India.

Viral hepatitis, caused by hepatitis viruses A through E, is a major public health problem in India. India has one fifth of the world’s population and carries a large proportion of the global burden of hepatitis B. India harbors 10 to 15 percent of the entire pool of hepatitis B carriers in the world, estimated to be 40 million HBV carriers. About 15 to 25 percent of HBsAg [the hepatitis B surface antigen] carriers are likely to suffer from cirrhosis and liver cancer and may die prematurely. Infections that occur during infancy and childhood have the greatest risk of becoming chronic. Of the 26 million infants born every year in India, approximately one million run the lifetime risk of developing chronic hepatitis B.

I’d rather answer this by describing my goals: to increase awareness, education and knowledge about hepatitis B and C in India; to conduct educational campaigns to reduce stigma surrounding viral hepatitis; to promote condom usage.

Since the formation of Rann Bhoomi Foundation, we have organized many awareness and hepatitis vaccination camps in India. We have immunized around 600 children, ages 6 to 16 years old.

There is a very low level of awareness about hepatitis, routes of transmission, risk factors and their impact on human health in the Indian community among health providers and policy makers.

Work for a hepatitis-free India; never give up.

India has one fifth of the world’s population and it accounts for a large proportion of the worldwide HBV burden. India harbors 10 to 15 percent of the entire pool of HBV carriers of the world.