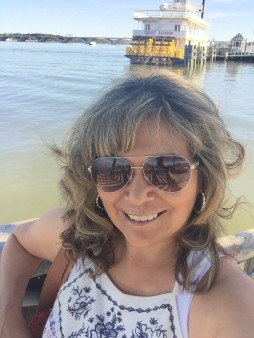 During a recent seven-hour drive with my mom, I realized that I had never told her how I thought I had contracted hepatitis C. Despite the fact that my mother had been by my side through my entire hep C treatment, and we have a solid, loving relationship, the question just never came up. When I was young, it was taboo to talk about it. I am not proud of how I got hep C, and we want our parents to be proud of us.

I told her that I probably contracted hepatitis C from needles. She asked if the people I used needles with were infected as well. I don’t know—that was over 37 years ago. I have not talked to them since. I was 17 when I put a needle in my arm. At that time, my drug of choice was cocaine. It became habit-forming. It was what I worked and lived for. I married when I was 19 years old and continued to live a life of needles and drugs. I was irresponsible and careless; there was no life, just living.

The day I stopped completely, I had overdosed on a mixture of valium and cocaine. I remember everything about that day, or at least I think I do. My chest felt like it was going to explode. I couldn’t stop hyperventilating, and the chemical was so strong I couldn’t breathe. I lost control of every part of my body. My then husband called the paramedics. They saved my life in more ways than one.

After the fog cleared and I had stabilized, I looked in the mirror and told myself never again. Never again was I going to put myself through this. I broke every needle, disposed of all drugs and just stopped. Two months later, I learned I was pregnant with my first child. My mind raced back to that day: Would she be OK? Would she survive what I had put my body through?

I saw a doctor and told him everything. He was very helpful, but the nurse treated me like a junkie. I delivered a healthy baby girl on December 11, 1982. The relief and the worry were taken over by joy; I fell in love with her from the moment I saw her. She was perfect in every way. I closed this chapter in my life, never to speak of it again to anyone.

Although I never used a needle again, I continued to use drugs and drink. When I was 37, I went into rehab. While there, I was tested for various medical conditions and learned that I had hepatitis C. It was the year 2000, and I was told to follow up with my primary care doctor.

From that point on, I told my doctor, dentist and people I dated that I had hep C. I felt damaged, diseased, dirty, disgusted. There was very little info on the web at that time. I tried several Chinese teas, colloidal silver, anything I could take to make me feel OK and protect my liver. However, my life was parties: backyard parties, dessert parties, sandbar parties, bars and lots of booze. It was legal; it was accepted.

My primary doctor ran lab tests twice a year. He did not want me to do the interferon treatment. I had asked if I could live another 20 years. “Of course,” he said. His instructions were, “No alcohol, no Tylenol.” So, I dropped the Tylenol and never took it again but continued the party lifestyle for quite a while.

In 2011, I switched my medical care to Kaiser. They also monitored my liver enzymes but did not think they were bad enough to consider interferon treatment. This was a big surprise to me since I had never stopped drinking. It wasn’t until 2013 that my AST and ALT levels began to rise to the three-digit range. I was testing every three months then.

I was also diagnosed with anxiety, depression and fibrosis, between F2 and F4. There was good news on the horizon: The FDA would soon approve interferon-free hep C treatment. I was put on the list to receive it.

My life changed that year. I slowly withdrew from friends and parties. I did this for me. I had to; my life was on the line. I don’t know if it would have made a difference if I had made changes when I was first told that I had hep C. All I know is someone was offering me the chance to be treated, and I had to stop everything to save my life.

It’s been two years now, and I am still undetectable. My liver has improved by 100 percent, with no signs of cirrhosis or scarring. My liver is just smooth. In the last two years, my passion and goal has been to get the word out about being tested, getting treated and moving on with your life. Sometimes I feel like no one is listening, and I remind myself to be patient. As patient advocates, we just need to keep saying it, sharing it, talking about it. It’s taken me a long time to be able tell my story.

When I was dating the man who is now my husband, we discussed hepatitis C and learned that we both had it. He just finished his treatment successfully last month and so far so good. My children are not infected. My family encourages my devotion to increasing hep C awareness and education. I thank God for my family. The love and support I receive keeps me going every day.

Overthinking about things I can’t control.

No alcohol or Tylenol.

I admire too many to name just one.

My story, the changes I have made in my life. When everything was at its lowest, I was able to pick myself up and learn from life’s hard lessons.  If I can do it, anyone can.

You don’t have to have the best of everything; just make everything the best you have.

A dragonfly. It symbolizes change, self-realization, mental and emotional maturity and the understanding of the deeper meaning of life.