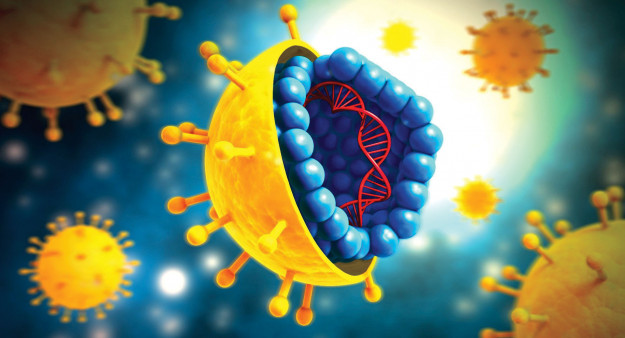 People who received a shortened course of antiviral therapy were less likely to be cured.

People with acute or recently acquired hepatitis C who received a six-week course of Epclusa (sofosbuvir/velpatasivir) were more likely to relapse and less likely to be cured than those treated for 12 weeks, according to results from the REACT trial.

The advent of direct-acting antivirals has made hepatitis C treatment shorter, better tolerated and much more effective than previous interferon-based therapy. The typical course of treatment for chronic hepatitis C virus (HCV) infection now ranges from eight weeks of Mavyret (glecaprevir/pibrentasvir) for previously untreated people to 12 weeks of Mavyret, Epclusa or Harvoni (sofosbuvir/ledipasvir) for most treatment-experienced patients.

Around a quarter to a half of HIV-negative people, and a smaller proportion of people living with HIV, naturally clear HCV within six months, the period usually defined as acute infection. The traditional advice was to wait six months before starting treatment, but the American Association for the Study of Liver Diseases now recommends that people with detectable HCV viral load should start treatment without delay.

Prompt treatment during acute infection can improve symptoms sooner, prevent rapid progression (for example, in people living with HIV), preserve immune response, reduce loss to follow-up and prevent onward transmission of HCV, Arthur Kim, MD, of Massachusetts General Hospital, explained at the recent IDWeek meeting. It may also allow for shorter treatment. By reducing transmission and shortening therapy, early treatment may be cost effective, even considering the likelihood of treating some people who would have spontaneously cleared the virus.

Previous small studies showed that six weeks of Harvoni cured acute HCV in HIV-negative people and in HIV-positive people with a low HCV viral load. But these findings had yet to be confirmed in larger controlled trials.

The REACT trial (NCT02625909), funded by the National Institutes of Health, was an international study of a short course of direct-acting antiviral therapy for people with recently acquired HCV. Recent primary infection was defined as detection of HCV antibodies or HCV RNA within six months of enrollment and either documented recent seroconversion (a positive result after previously testing negative within the past 18 months) or clinical symptoms of acute hepatitis or elevated liver enzymes within the previous 12 months. Recent reinfection was defined as newly detectable HCV RNA within six months of enrollment after prior spontaneous clearance or successful treatment.

Most of the 188 participants were white men with an average age of 44 years. A majority (61%) had HCV genotype 1a. More than two thirds were HIV positive. About 70% were exposed to HCV through sex with other men, and 44% reported ever injecting drugs; a third had reinfection. They were randomly assigned to receive Epclusa for either six or 12 weeks.

The study was halted ahead of schedule when it became apparent that the shorter regimen did not work as well. Results were initially reported at the 2020 Conference on Retroviruses and Opportunistic Infections and have now been published in the Journal of Hepatology. 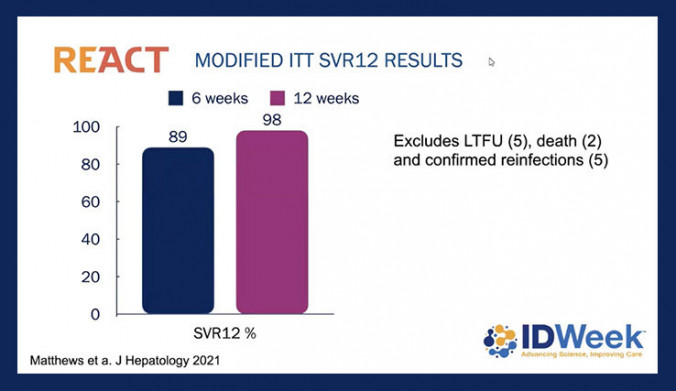 In an intention-to-treat analysis of everyone randomized to the two treatments arms, the sustained virological response (SVR) rate was 81.7% in the six-week group, compared with 90.5% in the 12-week group. After excluding those with treatment failure due to non-virological reasons (for example, loss to follow-up, death or reinfection), the respective SVR rates were 89.4% versus 97.7%. Nine people relapsed after the short course of treatment, compared with just two people after the 12-week course. SVR, or continued undetectable HCV viral load 12 weeks after completing treatment, is considered a cure.

These results show that the short course did not meet the criteria for noninferiority to the standard 12-week therapy, meaning it didn’t work as well.

“Engagement of individuals early in HCV infection is crucial for HCV elimination efforts,” they wrote. “Despite higher relapse in the short arm, REACT confirms that treatment initiated early in infection is safe, feasible and highly effective. Even with a relapse rate of 10% in the short arm, generation of resistance was limited, and almost all participants were able to be quickly and successfully retreated.” Nevertheless, “REACT clearly demonstrates that, at least in this predominantly HIV-positive population, six weeks of sofosbuvir/velpatasvir is suboptimal, and patients should be treated with at least an eight-week course.”