A Single Molecule May Drive Difference in Hep C Infection in Humans vs. Chimps

Researchers also found that pygmies in Africa harbored the same type of molecule protective against the virus as chimpanzees.

Searching for reasons why hepatitis C virus (HCV) is so insidious in humans but typically innocuous in chimpanzees, researchers identified a single molecule that is more protective against the virus in chimp livers compared with all but a very few number of humans.

Publishing their findings in PLOS Pathogens, researchers studied interferon molecules. Interferon is a type of immune-system alarm bell that, in a liver infected with HCV, signals the liver cells to produce antiviral molecules. A particular type of interferon known as IFNλ4is associated with a lower chance of clearing HCV spontaneously without treatment.

The study authors analyzed the genetic diversity of the IFNλ4 gene among humans and chimpanzees, the only other animal that can be infected with HCV. They wanted to know whether individuals who harbored variations of this gene had different abilities in inhibiting replication of the virus.

It turned out that a very rare iteration of the gene found in hunter-gatherer pygmies in Central Africa was superior at blocking HCV infection in laboratory experiments. This gene had similarities to the version of IFNλ4 seen in chimpanzees. Almost all other humans have genes that yield a weaker version of the molecule.

The researchers theorized that humans developed this weaker version of IFNL4 during very early human evolution, though what drove such an evolutionary shift and why just a few humans on earth retained the stronger version of the gene remains a mystery. 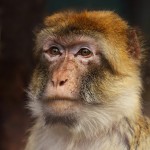 NIH Promises to Retire Chimps With HIV and Hepatitis