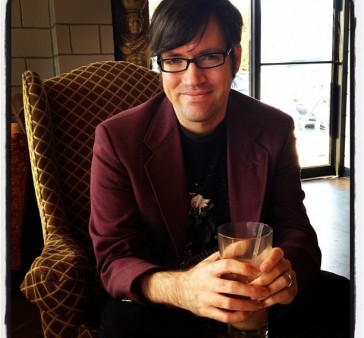 In 1975, I was born with hemophilia, which is a bleeding disorder. The use of blood products (concentrated plasma culled from thousands of sources) was a normal part of my life. My first recollection of having hepatitis occurred during a hospitalization when I was six. “Tell the nurse what you have,” my mother prompted. I replied, “Hemophilia!” “What else, Shawn?” quizzed my mother. “Uh?” “It starts with an h,” she prompted again, to no avail.

I could never remember “hepatitis B,” which I’d been exposed to via blood product treatments at age 5. My infection was discovered after I collapsed at my grandparents’ house and was rushed to the hospital. Years later, my father would accidentally prick himself while discarding needles used for my treatment. He contracted hepatitis B virus (HBV) and was hospitalized. Apparently, I commented, “Dad, you look like the yellow wallpaper.”

Aside from my initial reaction to the infection and my father’s bad luck, my HBV was largely forgotten. I’d get regular lab tests, but it wasn’t like hemophilia, which constantly reminded me of its existence. All it would take is a nosebleed, a bike wreck, or a wrestling match with a friend gone wrong, and I’d remember that I had hemophilia.

At age 11, I tested positive for another H word, one that would never need prompting: HIV. I lived in a small town, and testing positive had a devastating effect. I was kicked out of school with just one week to go before summer break. Quite a few of my friends’ parents wouldn’t let me come over to their house anymore. This occurred right around the time I had started to feel in control of hemophilia.

In my teens, I filed “HIV” alongside “HBV” in my mental cabinet of medical conditions. Begrudgingly, I went in for labs every few months, but I didn’t care to know what my T-cell count was. My doctor would always say with glee, “Well, you don’t have hepatitis C!”

When I was younger and more active, I often needed blood products. But after age 10, I lost interest in sports and roughhousing once I discovered a love for music and art. My ear, nose and throat (ENT) doctor performed an experimental operation that reduced the frequency of nosebleeds. The procedure was a success. The operation and lifestyle changes meant fewer blood product treatments—1 or 2 a year rather than 20 or 30. Now I was a “moderate” hemophiliac.

However, at age 18, I had a bleed that changed things again. I was home alone when I felt a trickle of blood in my nose. I tried my usual method of getting it to stop on its own, but nothing worked. This was before cell phones, so I could not easily reach my parents. I looked up my ENT’s home number in a phone book, and we met at the hospital; my parents arrived shortly thereafter.

By the early 1990s, hemophilia was a rarer condition because so many people with it had died from HIV-related infections. Because of this rarity, hospitals had stopped carrying blood product treatments. There were also blood safety concerns at that time, so my mom called her sister, who also has a son with hemophilia, and she brought some clotting factor to the hospital. The package label read, “Warnings: NONE.” I was treated, the nosebleed stopped, and I went home a half-hour later.

A few months later, routine lab results reported bad news: I’d tested positive for the hepatitis C virus (HCV). The news really shook me. After a decade with HIV, I was finally starting to feel like I was in control of the psychological effects of living with it. I spent that first night riddled with the worst thoughts: “Fuck. I survived hemophilia, hepatitis B and HIV. This one is going to get me.” That scenario played out repeatedly in my head that night, like the early days of my HIV diagnosis. I didn’t see good things in my immediate future.

I woke up with a different attitude. I had navigated the other medical conditions. If I had lived so long with everything else, why should this be any different? With a sense of strength and hope, I figured I’d deal with hep C when I needed to. I was both surprised and relieved by the turnaround in my thought process.

About five years after my HCV diagnosis, I got very sick because of HIV’s impact on my immune system. I lost close to 40 pounds. In 1999, I bounced back after starting on combination therapy for my HIV. However, it was an up and down process, and I had to be extremely cautious about what medications I took. Since so many of my medical problems were the result of unintended consequences of modern medicine, my treatment decisions had to be carefully considered. I was concerned about the long-term side effects that HIV drugs would have on my liver. I tried taking those meds week on/week off, and it worked like a charm. My T-cells stayed up, my HIV viral load remained undetectable, and I felt like I was taking care of my liver and quality of life.

In 2008, my hematologist informed me that repeated hep C labs had shown no progression since I tested positive in 1994. I was part of the lucky 15 to 25 percent who clear the virus naturally.

Fast-forward to 2013. I was attempting to increase my energy levels and concentration by trying different HIV treatment options, including continuous treatment in place of my week on/week off strategy. The combo that worked best had one little problem: It caused more bleeding episodes. I was treating hemophilia-related issues with a frequency I hadn’t experienced since I was a kid in the ’80s.

After a particularly large hemorrhage that required multiple treatments, lab results revealed the reemergence of an old, forgotten “friend”: hepatitis B. “Hepatitis WTF?” was my internal response.

My HBV viral load had skyrocketed. My hematologist was concerned, but when I gave my mom the medical update, she said, “Don’t do anything until your labs have been checked a month after your last hemophilia treatment.” She explained that when I was a kid, my hep B levels would always go haywire after receiving blood-clotting products.

My doctors didn’t think there was a connection but they agreed to wait and see. In this case, mother knew best. My HBV viral load had gone down to nearly undetectable levels.

It’s been nearly a year since that little adventure, and I’m happy to report that there’s been no escalation in hep B since. Plus, the side effects from my HIV medications have leveled off, and I’m not having as many bleeds as before. I’ve had a lifetime’s worth of experience with medical conditions, but I’ve also had all the tools necessary to outlive these little buggers. Hep C isn’t the only virus I’m going to clear.

What are your greatest achievements?
A few hold special meaning: writing my book, My Pet Virus; being a good partner to Gwenn, my wife; and being a loving godfather.

What is your greatest regret?
Like anyone, there have been missteps in my life, but not anything I regret. I’ve accumulated some knowledge, and I try not to repeat mistakes twice.

What keeps you up at night?
Literally, playing my Xbox 360, Comedy Central programming, and writing electronic music. I’ve always been a night owl. Creativity flows more freely when society is at rest.

If you could change one thing about living with viral hepatitis, what would it be?
I’ve lucked out with hepatitis. I know it’s been a much bigger deal for a lot of my blood brothers and sisters. I wish the stigma would vanish; it does no good for anyone’s health.

What is the best advice you ever received?
“Don’t let the bastards get you down.” My uncle wrote this in my art pad the year I tested HIV positive. My mom saved my life by teaching me that I shouldn’t let hemophilia bum me out, and that everyone deals with crap.

What drives you to do what you do?
I’m here when many who walked my same journey are not. Every day I am thankful. I honor those who are lost by enjoying my life.

What is your motto?
Be nice, stand up for yourself and have fun.

If you had to evacuate your house immediately, what is the one thing you would grab on the way out?
Gwenn!

If you could be any animal, what would you be? And why?
I’d be a raccoon like the wiseass Rocket Raccoon in Guardians of the Galaxy.