Drugs that have a favorable effect on biomarkers may still play a role in combination therapy, however.

Selonsertib, an investigational treatment for non-alcoholic steatohepatitis (NASH), worked no better than a placebo for improving liver fibrosis or reducing the risk of cirrhosis, according to a report at The Liver Meeting, the annual meeting of the American Association for the Study of Liver Diseases (AASLD), taking place this week in Boston.

NASH, and its less severe form, non-alcoholic fatty liver disease (NAFLD), are responsible for a growing proportion of advanced liver disease. The build-up of fat in the liver triggers inflammation, which over time can lead to fibrosis (buildup of scar tissue), cirrhosis (severe scarring) and liver cancer. With no effective approved medical therapies, management of the condition involves lifestyle changes such as weight loss and exercise. 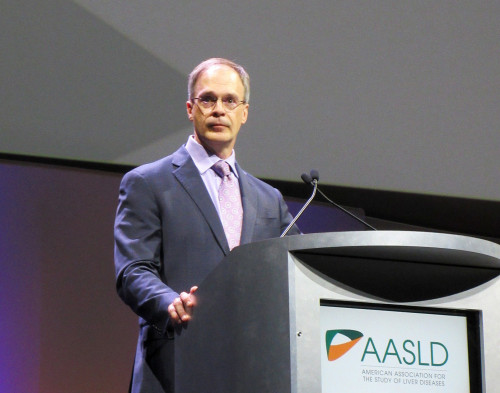 Selonsertib, from Gilead Sciences, inhibits apoptosis signal-regulating kinase 1 (ASK1), which promotes inflammation, liver cell injury and fibrosis. An earlier Phase II trial showed that a substantial number of people with NASH who took selonsertib experienced at least a one-stage decrease in fibrosis and a reduction in liver fat.

STELLAR-3 enrolled 802 people with bridging fibrosis, an advanced stage of liver scarring that falls short of cirrhosis (known as stage F3), while STELLAR-4 included 877 people with compensated cirrhosis (stage F4). In both studies, about 60% were women, most were white and median age was 59 years. All had biopsy-confirmed NASH, more than half had obesity and three quarters had diabetes.

Participants were randomly assigned to received selonsertib at oral doses of 6 milligrams or 18 mg once daily or a placebo for 48 weeks, at which point they received a second biopsy.

The trials were originally planned to last for five years, but they were halted at week 48 because results at that point showed a lack of efficacy, as Gilead announced earlier this year.

As the company reported in August, 12.1% of STELLAR-3 participants treated with the lower dose of selonsertib and 9.3% of those who received the higher dose had at least a one-stage improvement in fibrosis without NASH worsening. These percentages did not differ significantly from that of the placebo group (13.2%), meaning the differences could have been driven by chance. (Harrison reported these figures as 12%, 10% and 13%, respectively.)

Likewise, as announced in February, 12.5% of STELLAR-4 participants randomized to receive 6mg of selonsertib and 14.4% of those treated with the higher dose achieved the primary endpoint, again not significantly different from 12.8% in the placebo group. (Harrison reported these figures as 13%, 14% and 13%, respectively.)

Looking at other endpoints, 14% of STELLAR-3 participants in the low-dose selonsertib group and 13% in the high-dose group experienced fibrosis improvement, compared with 16% in the placebo group, Harrison said. In addition, 4% in the low-dose group, 5% in the high-dose group and 9% in the placebo group had NASH resolution without worsening of fibrosis. The likelihood of progression to cirrhosis was similar across the groups (16%, 13% and 16%, respectively).

The same pattern was seen in STELLAR-4. Fibrosis improvement occurred in 17% of the low-dose selonsertib group, 19% of the high-dose group and 16% of the placebo group. NASH resolution without worsening of fibrosis was less common among the people with cirrhosis in this study, but again rates were similar across groups (4%, 2% and 4%).

None of these differences were statistically significant.

Harrison also reported that selonsertib had no beneficial effects on liver biochemistry, noninvasive test results or other biomarkers. During a median follow-up period of 16 months, 3% of participants experienced liver-related clinical events.

Selonsertib was generally safe and well tolerated. About 15% of participants across treatment groups in both studies experienced severe (Grade 3 or 4) adverse events. Discontinuation due to adverse events was rare (3% or less) in all groups.

Selonsertib joins a growing list of NASH drug candidates that have failed to work on their own in clinical trials, even though early studies showed they have favorable effects on relevant biomarkers. In the STELLAR trials, biochemical analyses revealed that selonsertib did, in fact, inhibit ASK1 as intended, but this did not lead to the desired improvements in clinical outcomes.

However, these negative results will help researchers learn more about fatty liver disease and inform the design of future trials. Agents that show positive effects on biomarkers may have potential as components of combination therapy, Harrison said.

Given the many different biological processes that play a role in fatty liver disease, optimal treatment may involve combining drugs that work by different mechanisms. Gilead is currently testing selonsertib in combination with cilofexor, a nonsteroidal farnesoid X receptor (FXR) agonist, and firsocostat, an acetyl-CoA carboxylase inhibitor, in the Phase II ATLAS study.

to read the study abstract.

Health Care for People With NASH and Obesity Will Cost Billions