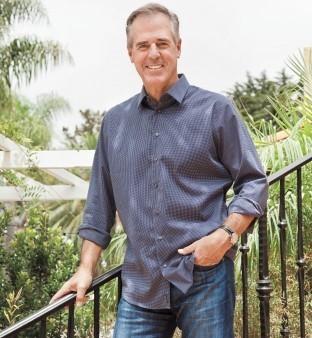 The following is an excerpt from the Hep Winter 2016 cover story:

In many ways, you could say that Rolf Benirschke, 61, led a completely charmed life until his early 20s. He grew up the handsome, privileged son of a Dartmouth College medical professor and excelled in sports.

Benirschke was such a good kicker that he was courted by the University of California at Davis and was drafted into the National Football League (NFL), playing first for the Oakland Raiders and then for the San Diego Chargers under the renowned coach Don Coryell.

In 1978, fate took a turn. During his second season with the Chargers, Benirschke was diagnosed with Crohn’s disease, a bowel disease that causes inflammation of the lining of the digestive tract, which can lead to stomach pain, severe diarrhea, fatigue, weight loss and malnutrition—and can be life-threatening.

“I collapsed on a plane flying home from a game,” Benirschke says. Also diagnosed with ulcerative colitis, he had his colon and part of his intestine removed in surgery. He needed almost 80 units of blood to survive. He was in an intensive care unit for almost six weeks, lost 65 pounds and left the hospital with two ostomy bags. “The Lord intervened, and I was allowed to live,” he says. With no more colon, he was essentially cured.

Yet just barely—or that’s what it felt like at the time for Benirschke. “I thought, Why didn’t I just die? I can’t see my life being of any value or fun now,” he says. “I certainly thought I could never play football again or ski, scuba dive, bodysurf or play tennis. I was single, and I liked girls, and I was pretty sure nobody would be interested in me.”

Thankfully, the Chargers took him back. “It’s remarkable the owner and the coach gave me another chance, because there were 100 kickers waiting in line behind me,” he says. He wore ostomy bags for the next four years until a new surgery created an internal pouch, which allowed him to stop using the external bags.

He was named the NFL’s Comeback Player of the Year in 1980 and its Man of the Year (now called the Walter Payton Award) in 1983. He played a decade for San Diego and was the third most accurate kicker in NFL history when he retired in 1987.

Amid all that football, he also became an advocate for people living with Crohn’s and colitis. “Wherever we would play,” he recounts, “local sports writers would cover my health ordeal, then patients or families who’d read the stories would write me letters: ‘How can you play football with an ostomy bag? I’m trying to go to school, hold down a job, travel.’ I realized nobody was talking about Crohn’s, so I started speaking publicly about it. That changed my life, encouraging patients. I helped create a major program for an ostomy manufacturer that ran for 36 years.”