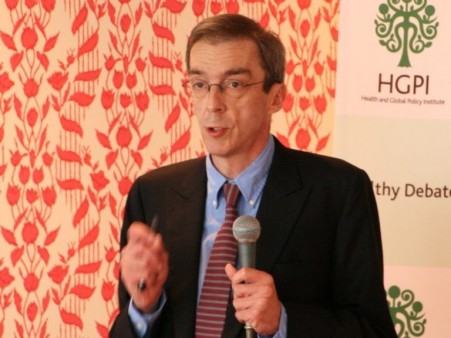 Patient Associations: A Key Catalyst for Hepatitis Advocacy and Impact

The experts in the European Liver Patients Association (ELPA) Hep-CORE advisory group provide a window on the broad range of hepatitis activities and perspectives in Europe today. Hep-CORE PI Jeffrey Lazarus has been interviewing some of them about how they came to work with viral hepatitis, how the field has been changing, and what new research is called for. The seventh interview in the series is with Charles Gore, Chief Executive and co-founder of The Hepatitis C Trust in the United Kingdom, and founder of the World Hepatitis Alliance (WHA).

My initial intention was to be a trustee. However, while we were going through the legal process of establishing the charity, the other three founders ambushed me and asked me to run this new organization. I pleaded that I was completely unsuitable and had no experience of running a charity but they told me that they were simply too busy to do it themselves. The Hepatitis C Trust received charitable status at the end of 2000 and we started operating in 2001, initially focusing on providing information and support but we soon expanded to provide representation for people living with hepatitis C.

In 2002 I was involved in organizing a meeting of hepatitis C patient groups from across Europe. Following this, three of these groups, from France, Germany and Italy respectively, decided to create an umbrella organization to be called the European Liver Patients Association (ELPA) as all three groups were involved with more diseases than just hepatitis C.

While it was being created they asked us at The Hepatitis C Trust to join but at the time I refused as our workload in the UK was already quite extensive and we had no intention of expanding beyond hepatitis C into liver disease in general. However, they felt that it could not properly be called a European organization if it did not have representation from at least the big four Western European countries. Eventually I was persuaded to join under the strict understanding that I would not be required to do anything. However, the best laid plans…

Through a series of unfortunate events I ended up getting more and more involved and the saga culminated with me being elected ELPA’s first president in 2004. This meant that I became increasingly involved with hepatitis B, although not in the UK.

My term as ELPA president ended in the summer of 2006. My one regret was that I had not succeeded in really raising the profile of hepatitis C. Towards the end of 2006 I decided to ask all the patient groups I had come across around the world to choose a representative from their geographic region to come to a meeting at the European Association for the Study of the Liver (EASL) meeting in Spring 2007.

Luckily one of my staff at the Trust, Raquel Peck, was perfectly suited to help me with this, speaking fluent Spanish and Portuguese. We also invited you, if you remember [Jeff Lazarus], while you were working at WHO EURO. You were the only WHO staff member I knew at the time who was experienced in viral hepatitis. In fact, you actually provided a key piece of advice for the direction of this meeting: that we should look at viral hepatitis as a whole and not simply at hepatitis C, which was an option at the time.

The result of the meeting was a decision to establish a World Hepatitis Day (WHD) on May 19th 2008. I had originally seen myself merely as the convener of the meeting, since there was a new president of ELPA representing the European region. However, yet again, it became apparent that I was expected to take the lead in organizing WHD. Luckily, I was able to recruit Raquel to help me and it soon became clear that we needed a new organization to run WHD. After investigation on the ideal location for such an international health organization, the World Hepatitis Alliance was born in Geneva.

One of the major changes has been the development of direct-acting anti-viral (DAA) drugs for hepatitis C with their extraordinary efficacy, short treatment duration and tolerability. This has led to the possibility of curing millions of people and potentially entirely eliminating the virus as a public health threat. This has brought renewed focus to bear on hepatitis C, although not always positively as the economic cost of these new drugs has caused outrage amongst advocates.

At the same time, global advocacy, not least by the World Hepatitis Alliance, has raised the profile of viral hepatitis resulting in two WHO World Health Assembly resolutions. The first established World Hepatitis Day as one of only four official WHO disease-specific awareness days and pushed WHO into creating the Global Hepatitis Programme. The second called for an assessment of the feasibility of the elimination of both hepatitis B and hepatitis C and for specific targets to begin making that happen.

Consequently we now have the first ever Global Health Sector Strategy for viral hepatitis1 with a goal of elimination by 2030, as well as clear 2020 and 2030 targets. Two WHO regions, the Western Pacific and the Americas, have already produced regional hepatitis action plans and three other regions are in the process of developing them. Only the African region has yet to begin a plan. We also have viral hepatitis specifically included in the Sustainable Development Goals.

This increased global priority, together with stronger national advocacy, has now pushed more and more countries into developing national hepatitis strategies and action plans. However, funding remains a major barrier and, while generic versions of the key drugs are increasingly available in low income countries, the cost is often still too high because the demand from government programs has yet to materialize. There are also significant challenges around scaling up interventions across the whole continuum of care.

Yet overall there seems to be a willingness to tackle viral hepatitis at last. This shift has been a long time coming, and consequently there is so much catching up required, but it appears we are on our way.

What areas of viral hepatitis research do you think are being neglected?

1 – Draft hepatitis strategy presented to 69th World Health Assembly 28 May, 2016. Final version to be posted on the WHO website shortly