Pain Is Common Among People With HIV, Drags on Quality of Life

This is according to a survey of people living with HIV in the United Kingdom and Ireland.

People living with well-treated HIV frequently suffer from physical pain, which is associated with compromised quality of life and lack of employment.

Publishing their findings in the journal AIDS, researchers recruited HIV-positive people at seven sites in the United Kingdom and Ireland between 2013 and 2016 and had them complete questionnaires. They enrolled 676 people with HIV age 50 years old and older (referred to as “older”), 357 people with HIV younger than 50 (“younger”) and 295 HIV-negative people age 50 and older (“older controls”).

Ninety-eight percent of the people with HIV were on antiretrovirals and 90 percent of the overall group had a fully suppressed viral load. The median CD4 count among them was 626 (above 500 is considered optimal).

People reporting pain during the current month were more likely to be female, heterosexual and Black.

Fourteen percent of those reporting pain said they had missed days of work due to such symptoms, including 19 percent of the older people and 12 percent of the younger people with HIV and 8 percent of the controls. About one third of those who reported current pain were unemployed or on sick leave, compared with a rate about half that among those not currently in pain.

Nearly all quality-of-life indicators were poorer among people with HIV who reported pain, including rates of depression.

To read a POZ feature article on chronic pain among people with HIV, click here. 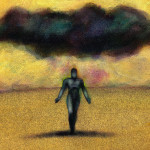