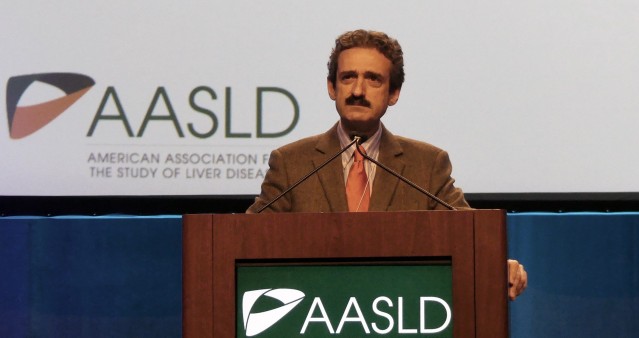 The median survival exceeded 15 months for patients previously treated with the only approved first-line therapy.

The checkpoint inhibitor Opdivo (nivolumab), which helps the immune system fight cancer, led to tumor shrinkage or stable disease in more than half of treated patients with liver cancer, according to results from the Checkmate 040 trial presented at the American Association for the Study of Liver Diseases (AASLD) Liver Meeting, held last week in Washington, DC.

These extended follow-up results were the basis for the Food and Drug Administration’s September approval of Opdivo for the treatment of people with liver cancer who previously used the kinase inhibitor Nexavar (sorafenib), the only approved first-line therapy, according to Bristol-Myers Squibb.

Over years or decades, chronic hepatitis B or C, heavy alcohol use, fatty liver disease and other causes of liver injury can lead to the development of liver cirrhosis and hepatocellular carcinoma (HCC), a type of primary liver cancer. This type of cancer is often detected late and is difficult to treat.

Opdivo is a monoclonal antibody that blocks the PD-1 receptor (an immune checkpoint) on T cells, the main soldiers of the immune system. PD-1 plays a role in regulating immune function. Some tumors can hijack PD-1 to turn off immune responses, and drugs like Opdivo can release the brakes and restore T-cell activity against cancer cells.

At the Liver Meeting, Bruno Sangro, MD, of Clinica Universidad de Navarra in Spain, presented the latest results from the CheckMate 040 trial. This study enrolled 262 people with advanced liver cancer who couldn’t be cured by surgery. A majority were men, and the median age was about 63. A quarter had hepatitis B, another quarter had hepatitis C and half had neither virus. Nearly 70 percent had metastases, or cancer spread beyond the liver.

A group of 48 patients were included in a dose-escalation phase, receiving IV infusions of 0.1 to 10 milligrams/kilogram of Opdivo every two weeks. A 3 mg/kg dose was chosen, and 214 more people were enrolled in an expansion cohort. In both parts of the study combined, 80 people had not previously used Nexavar and 182 had done so. In the latter group, about 90 percent experienced disease progression while on Nexavar.

The objective response rate—meaning complete or partial tumor shrinkage—was 20 percent for people who had never used Nexavar, 19 percent for Nexavar-experienced patients in the dose-escalation group and 14 percent for experienced people in the expansion cohort. Complete tumor regression was rare in all three groups (1 to 3 percent). Sangro noted that people who could not take Nexavar due to intolerance had a better response rate than those whose cancer progressed while on Nexavar (15 percent versus 23 percent).

The median overall survival was 15.0 months in the Nexavar-experienced dose-escalation group and 15.6 months in the expansion cohort. For comparison, patients who switched from Nexavar to a recently approved similar drug, Stivarga (regorafenib), had a median survival of about 11 months. The projected median survival duration rose to about 29 months for people who had not previously used Nexavar, but Sangro cautioned that this group was small and more data are needed.

Interestingly, nearly 40 percent of study participants with hepatitis C virus (HCV) had at least a 1 log drop in HCV viral load after starting Opdivo, and one was cured without taking hepatitis C treatment. Opdivo had no consistent effect on hepatitis B virus (HBV) levels, however.

Treatment with Opdivo was generally safe and well tolerated, with no unexpected side effects not seen in other trials. The most common side effects were fatigue, itching, rash and diarrhea, mostly mild or moderate.

The major concern with checkpoint inhibitors like Opdivo is immune-related side effects. These drugs work by restoring immune responses against cancer cells, but they can also take the brakes off the immune system more broadly, leading to inflammation of healthy tissue. Severe adverse events were uncommon in this study, but some people had serious liver enzyme elevations—which were reversible and “easily managed,” according to the researchers—and one patient died of lung inflammation.

In this study, Opdivo “demonstrated clinically meaningful efficacy” in people with different causes of liver cancer, the researchers concluded.

Opdivo is currently under study for first-line treatment and for both initial and follow-up treatment in combination with other medications.