Detail from a policy brief on new WHO guidelines for HIV, hepatits and STIs Courtesy of WHO.int

New Global Guidelines on HIV, Hepatitis and STIs for Those Most Affected

WHO offers the best ways to prevent, diagnose and treat HIV, hepatitis and sexually transmitted infections for five key populations.

The Word Health Organization (WHO) has issued a new set of global guidelines that outline how best to prevent, diagnose and treat HIV, hepatitis and sexually transmitted infections (STIs) among the populations most affected by these diseases, according to a WHO press release.

According to a policy brief, the WHO’s efforts underline the association between these health issues and stigma, criminalization, human rights, unemployment, race, disability and more. The guidelines also consider the biological and social factors that can influence public opinion regarding HIV, hepatitis and STIs.

WHO published ???? consolidated guidelines for prevention, diagnosis, treatment and care of #HIV, #hepatitis, and sexually transmitted diseases for key populations.

The WHO worked with networks within the following five key population groups to create the new consolidated guidelines:

“The new data from UNAIDS [the Joint United Nations Programme on HIV/AIDS] show that around 70% of new HIV infections occur among key populations and their partners,” said Meg Doherty, director of the WHO’s Global HIV, Hepatitis and STI Programmes, in the press release. “In most countries, limited access, inadequate coverage and poor quality of services for key populations continue to undermine responses to HIV, viral hepatitis and STIs. All countries should prioritize reaching these key populations and supporting key population communities to lead the response and provide equitable, accessible and acceptable services to these groups.” 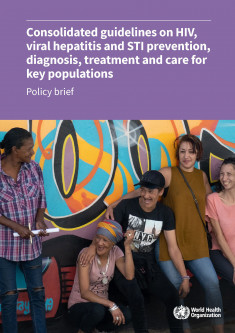 Cover of a policy brief on the WHO guidelinesCourtesy of WHO.int

The policy brief on the guidelines explains why the population groups that are the focus of the HIV responses are also key targets of efforts to combat hepatitis and STIs:

Along with the resulting guidelines, the WHO published a series of anonymous quotes about the the recommendations. One participant noted, “As a trans person who injects drugs and is living with HIV, I feel empowered through the consultation process to inform the guidelines. I was able to contribute to the global response to HIV, viral hep, and STIs with something much bigger than myself and my work at the community level.”

The report was released to coincide with the International AIDS Conference (AIDS 2022), which was held July 29 to August 2 in Montreal. To download the free report, click Consolidated guidelines on HIV, viral hepatitis and STI prevention, diagnosis, treatment and care for key populations.