A husband prepares to scale the heights of Mount Rainier for his wife. 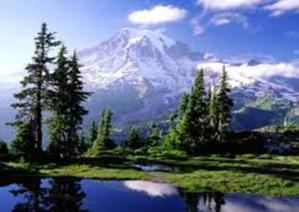 I am a 41-year-old father of six wonderful children and a loving husband to my wife, Carleen. We currently live in a small, beautiful community north of Colorado Springs called Monument. We moved here three years ago to start a business in what I like to call “God’s Country.” This move has inspired me to become an outdoorsman and mountaineer whose hobby is climbing 14ers. Those are Colorado’s 58 mountain peaks that rise more than 14,000 feet above sea level. We absolutely love it here.

During our ﬁrst few months of being in Colorado, we were delighted to learn that we would be expecting our sixth child, a boy. We would now have five boys and one girl. Imagine our excitement!

Yet that excitement began to fade once my wife had some test results come back indicating that she had contracted hepatitis C (HCV). After some careful research to discover the cause, we concluded it was a blood transfusion that Carleen had had back in 1987, before blood was screened for HCV. That lack of screening proved fateful. It turns out my wife had been living with HCV for over 26 years.

Carleen continued on with the pregnancy and on November 29, 2011, our sixth son, Kyle, was born. Six weeks after Kyle’s birth, Carleen’s doctor recommended that she have a liver biopsy done. It was a short outpatient procedure and we were curious to see the results after her having had HCV for so many years. Also, we would soon need to discuss treatment methods and things we could do to put this all behind us. So, we scheduled the procedure.

The biopsy, normally a simple outpatient procedure, turned into a nightmare. Carleen was in pain from the moment the doctor had finished. She was sent to the ER, then home, and finally back to the ER before it was discovered that the doctor had hit an artery while performing the biopsy. My wife was slowly bleeding to death.

A surgeon was called to discuss our options with us, but the news was grim. We were informed that surgery to correct the issue would likely result in death. Of course, we were devastated.

The doctors told us that they would do angioplasty to try to stop the bleeding. Carleen ended up spending several weeks in the ICU before being released, only to discover within days that she was still bleeding internally. This was only the beginning.

Because of the HCV and the botched biopsy, the last few years have been filled with countless hospital trips and doctor visits. These events have been traumatizing to my wife and she has suffered tremendously. Each time we left the hospital, we had no way of knowing if the bleeding had stopped for sure.

Also, Carleen’s condition and frequent medical needs severely hindered her ability to care for and bond with our newborn son. Out of sheer necessity, and love for my family, I had to step up and be Mr. Mom. This experience has been filled with pain, fear and uncertainty for my family and me.

Carleen has yet to have treatment due to all the complications that have occurred. However, with the new drugs and treatments coming out in the next few years we are looking forward to getting her healed!

Recently, I have been thinking of climbing Mount Rainier, a massive stratovolcano located 54 miles southeast of Seattle, Washington. It is the most topographically prominent mountain in the contiguous United States, rising over 14,000 feet. I’ve had it on my heart for a while to climb for someone other than myself. One day, it occurred to me that there was not nearly enough media exposure for HCV. There is so much coverage and awareness for other diseases, but not for the one that hits so close to home for me and my family. It really gets overlooked.

I suddenly realized that I had a purpose for the climb. I would climb for Carleen! Through the American Liver Foundation, I have decided to raise funds to help families become more aware of HCV and liver disease. I have already begun my training and plan to climb Mount Rainier June 3-8.

This is my way of showing my wife that I truly do care for, love and support her.


James McGuffey of Colorado plans to climb Mount Rainier on behalf of his wife Carleen and to raise funds for the American Liver Foundation.