Lucinda Porter Honored as a Star of Hepatitis C Advocacy 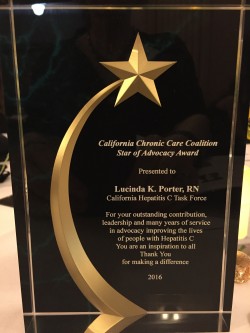 Porter, a longtime advocate for people living with hepatitis C virus (HCV), was presented with the award by Bill Remak, the chairman of the California Hepatitis C Task Force. “Lucinda is in a league of inspiring people that push the boundaries of the expectation of goodwill and humanity that is needed to improve the lives of the sick,” he said.

Porter’s advocacy began in 1997, when she was volunteering at a needle exchange. At that time, she was living with hep C as well, but she turned the personal political, recognizing that “hepatitis C was a larger problem than I had realized. I could see that my community was in trouble, and that if I didn’t take action, the problem would continue to grow,” she said in a press release.

This led Porter, a former hepatology research nurse, to her now full-time work advocating for people living with hep C and educating everyone about the virus. She speaks and writes extensively on the topic, which she’s been doing at HEP since 2014.