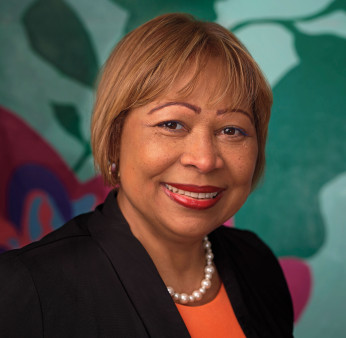 Like many Latinos in the United States, New Yorker Alejandrina Peña had hepatitis C—until a great doctor and powerful new treatment gave her a fresh start.

“I’m a proud Dominicana!” declares Alejandrina Peña, 65, of the Bronx. When she’s not working as a cashier at an East Harlem supermarket, Peña enjoys eating mofongo.

Andrea, one of the four sisters she lives with, often makes the fried plantain dish mashed together with pork or seafood. Either that, or she goes out to eat at La Casa Del Mofongo in Washington Heights, a heavily Dominican neighborhood in Upper Manhattan, just across the Harlem River from the Bronx.

The area reminds her of Santo Domingo, the capital of the Dominican Republic (D.R.), where she grew up and where her beloved daughter and grandson live. As a young woman, she worked for the phone company there while making numerous trips to New York City to visit family and friends before she finally moved to New York City for good 12 years ago.

Yet it was after having surgery in the D.R. for a faulty heart valve at age 19, back in the 1970s, that she was told she likely had some kind of hepatitis, based on abnormal liver tests. She felt no symptoms, so she went on with her life.

In the early ’90s, by which time researchers had identified the liver-damaging hepatitis C virus (HCV) and she had tested positive for it, Peña was treated in Santo Domingo with interferon therapy. The treatment was so expensive—$1,000 per injection—that she had to organize a fundraiser among family, friends and coworkers to pay for it.

The side effects of hep C treatment were horrible. “I had fevers and dizziness, but I stuck it out for six months,” she recalls. Yet subsequent lab tests indicated that it had not cured her HCV.

Fast-forward to about 2011. Now living in New York City, Peña entered a clinical trial at Weill Cornell Medicine to see whether old-line hep C treatment plus a new experimental agent, telaprevir, could cure her. The regimen caused a rash all over her body, so she stopped. (Telaprevir itself was discontinued a few years after it came to market, having proved inferior to newer HCV medications.)

“I was disappointed,” she says, “but I moved on. I’m not a person who gets down.”

Her luck started to change once she went to East Harlem’s Metropolitan Hospital, part of the longtime public New York City Health + Hospitals Corporation, and enrolled in the hospital’s hep C standard of care program, which consisted of older drugs combined with one of the new drugs that revolutionized hep C treatment in the early 2010s by achieving high cure rates with minimal to no side effects. (Older hep C treatments had offered the reverse—low cure rates and frequent, severe side effects.)

At Metropolitan, Peña met a powerful woman who would change her life: gastroenterologist and hepatologist Nora Bergasa, MD, Metropolitan’s Cuban-born chief of medicine. “I loved her instantly because she treated all her patients with dedication, care and love,” says Peña. Bergasa returns the compliment: “I was very impressed by Alejandrina’s stamina,” she says, “the fact that she had never given up.”

Likely because her treatment included the older drugs interferon and ribavirin, which are now seldom used in HCV treatment, Peña experienced harsh side effects, including depression, anxiety and insomnia. Even worse? After nearly a year of treatment, her hep C was still not cured. “I was disappointed, but I maintained my sense of humor,” she says.

But then in 2017, Bergasa treated Peña with an even newer drug, Zepatier plus ribavirin but no interferon. After several weeks, Bergasa had amazing news for her: She was definitively cured of HCV.

“The first thing I said was, ‘Thank you, God!’” recalls Peña, “because I’d waited a long time.” She and the doctor hugged and cried together, and that night, Peña celebrated the good news with family and friends over a moist and airy Dominican cake. 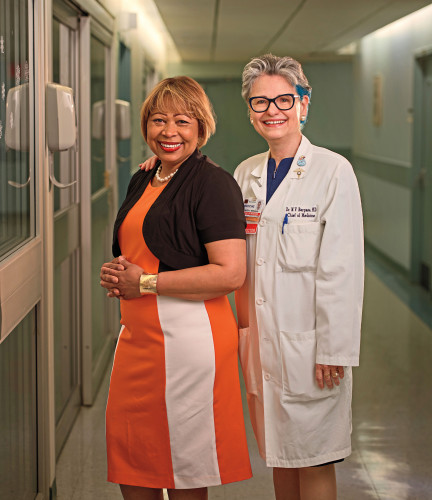 According to Bergasa, since powerful new treatments for hep C emerged in the early to mid-2010s, she estimates she has cured more than 95% of the people she has treated at both Metropolitan Hospital and Woodhull Hospital in Brooklyn.

“Hepatitis C treatment has been revolutionized by the availability of meds that are safe, well-tolerated, effective and leading to cure in the majority of patients treated,” she says. “We have to give credit to the behind-the-scenes scientists who developed these drugs.”

She notes that though drugmakers have been criticized for the sticker price of the drugs—often as high as $1,000 a day for a 90-day course of treatment—they have also sought to make them accessible.

“Patients come to us without insurance, and we get them free meds from the companies that make the drugs,” Bergasa says. “I’ve never not treated a person because of a lack of medical insurance or their immigration status.”

Hep C rates among Latinos are high, says Bergasa. Most of her patients are Latino, and in the United States, chronic liver disease is a leading cause of death for Latinos. She says Latinos are not inherently at greater risk for HCV, but they may have been exposed to the virus through blood products or medical procedures in their country of origin many years ago.

Having said that, the majority of hep C cases overall—not just among Latinos—are transmitted via those who inject drugs with infected syringes or other equipment. It’s important, says Bergasa, that anyone who has injected drugs, gotten a tattoo or received blood products or medical treatment, such as surgeries, transplants or even dental treatments, be tested for hep C. Often, abnormal results on basic liver tests will signal that hep C is lurking.

“If you ask for a hep C test and the doctor says you don’t need it, you need to demand it or find another doctor,” says Peña.

According to Bergasa, the majority of her patients who are cured of hep C go happily about their lives after that. But those with advanced scarring (fibrosis) on their livers will still have to be screened every six months indefinitely for signs of liver cancer. “That’s a disappointing piece of news for some patients after we tell them they’re cured of hep C, but it mustbe said,” she adds.

Bergasa believes that the work she and her team—which also includes Jennifer Harley, MD, Metropolitan’s chief of gastroenterology and hepatobiliary diseases—have done to fight hep C in New York City should set a national model. Particularly, she says, they have shown that when they linked hep C testing and treatment to a Metropolitan clinic for primarily Latino New Yorkers receiving methadone treatment to combat opioid addiction, they achieved high HCV cure rates among current or former drug users, who are often stereotyped as being hard to keep in medical care .

Not only that, says Bergasa, but a study her team conducted found that the methadone patients who completed hep C treatment to the point of cure reported much higher quality of life, including improved mood, energy and appetite.

The key, she says, was establishing a rapport and a sense of trust with the patients. “We were all physically there at the methadone clinic, taking our treatment to them instead of vice versa, so they got to know our names and faces,” she says. She hopes similar programs start to pop up around the country.

It’s that intimate level of care that forged the close bond between Bergasa and Peña, who urges Latino community groups nationwide to spread the word about the importance of getting tested for hep C—and then, if someone tests HCV positive, talking with medical providers about starting treatment as soon as possible.

“Get tested!” Peña declares. “Then believe in God, your doctors and the fact that you can get better. I now consider myself a spokesperson for people with liver disease, and I recommend that everyone get treatment.”

Last year, Peña also learned that her liver fibrosis (scarring) had decreased to a minimal level, likely due to her eradicating hep C via treatment. Now, more than ever, she’s ready to live her best life, trying to kick-start a new career in marketing. She also takes care of herself. She does Zumba and boxes for exercise, eats a diet heavy on fish and vegetables and keeps all her medical appointments.

Plus, she says, “I’m looking for a boyfriend! I want a tall, rich doctor who’ll take me traveling around the world.” Should he be able to make mofongo as good as her sister’s? Not necessary, she says. “We’ll eat out!”

Here are some steps you can take to keep your liver healthy.