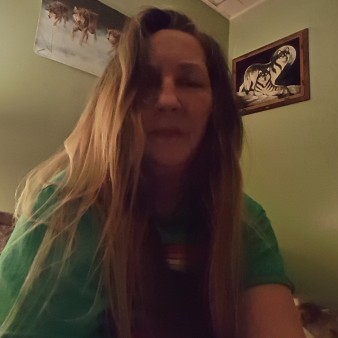 I grew up in an alcoholic family, so drinking was a normal part of life for me. When I was 8, a family member started sexually molesting me. I started drinking around that time. I kept this a secret until I was in rehab at the age of 29. I also used every illegal drug under the sun. I drank alcoholically for 45 years, destroying my liver.

I’m not completely sure how I contracted hepatitis C since I have multiple risk factors. It most likely happened when I had a piercing done with an unsterile needle at age 15. I tested positive for hep C right after my son was born in 2001. He also tested positive. Since then, I have been treated twice. The first was with a combination therapy of interferon, ribavirin and Incivek, which almost killed me. I quit drinking, smoking and abusing drugs several times since my son was born. In 2013, I put myself into long-term rehab for my addictions.

I found out there that hep C had destroyed my liver, and I was diagnosed with end-stage liver disease. I had all the medical complications that go along with it. I was treated with the combination of Sovaldi and Olysio in 2015. I have had a sustained virologic response for more than a year. I am clean and sober for more than three years.

Now I am focused on my 14 year-old son who has hep C and fibrosis. His gastroenterologist says he will need treatment, but we can’t afford the medicine at this time, so I’m looking into getting him in to a clinical trial. All of this has made me a stronger person today. I don’t take anything for granted, and I live one day at a time. My name is Lisa, and this is my story.

I don’t have any

This too shall pass

This too shall pass

A wolf, because of their strength and perseverance.