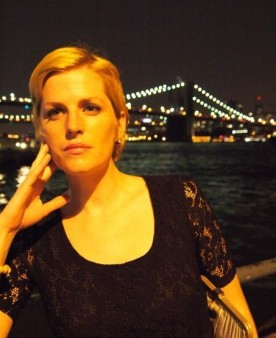 The day I found out I tested positive for the hepatitis C virus was dark and snowy. I had walked from my apartment to Planned Parenthood, which was less than a half-mile from my home. It was nearly five o’clock in the evening, and very windy. Lashes of freezing sleet whipped my face, causing me to swear under my breath that I was going to move somewhere warm.

As I made my way into the lobby of the clinic, I was met by a middle-aged woman with a wan expression. I was taken into a small exam room by a woman who was presumably a nurse. A look of concern spread across her face as she told me she had good news and bad news. The good news was I had tested negative for HIV. I hadn’t been promiscuous as a teenager (thanks to my somewhat demented puritanical upbringing), so I wasn’t surprised my HIV test was negative. What surprised me was the bad news: The nurse informed me I tested positive for hepatitis C. I wasn’t even eighteen.

The words came out of her mouth slowly and cautiously. All I could do was stare up at the ceiling, my eyes wet with warm tears. She asked me if I had anyone with me, and I told her no. The only person who knew I was there was my boyfriend. Out of fear and shame, I hadn’t told anyone else that I was going to get tested. I didn’t know what to do or say. I knew nothing about hepatitis C. At that moment, I didn’t want to know anything about it. I wanted to get out of there. After the nurse ordered more lab tests from the nearby hospital, I got the hell out of there. I trudged back home through the snow, my face streaked my tears.

Within three months of my diagnosis, I was on the streets of San Francisco shooting black tar heroin. My cousin Erin had just passed away from a drug overdose in New York, which was utterly devastating. I wanted to get as far away from the East Coast as possible. I moved to a shabby apartment on the border of Berkeley and Oakland, where I resumed taking illicit drugs. My life was on a trajectory of self-destruction. In my mind, I had created a self-fulfilling prophecy of doom. I was convinced that I was inadequate and worthless.

For many people, a scary diagnosis can be a catalyst for change. Fear is a big motivator. For me, I oscillated between fear and apathy. As my drug addiction worsened, any rational fear I had in regards to my health and personal safety vanished. I didn’t show up for appointments at the local clinic for blood work. I drank MD 20/20 and didn’t eat much of anything except for Tina’s Burritos and Fritos. I tried to think about anything but the diagnosis. When I thought about my hep C, I wallowed in misery.

About a month after arriving in California, I had a frightening drug overdose. I thought I should get away for a bit. Before going to visit my aunt in San Diego, I had lab work done at a free clinic in San Francisco. The staff was incredibly friendly. They informed me that if I took good care of myself, I would have a better chance at living a long life. They informed me that my condition was chronic, and only 15 to 25 percent of people clear the virus on their own. I was told to abstain from alcohol and to avoid processed foods. After leaving the clinic, I felt better, but was still discouraged. I planned to take better care of myself. I promised myself that I would educate myself about the disease, and not be ignorant about it.

I didn’t end up getting sober until three years later. By then, I had moved back to New England and was getting my lab work done at a local hospital. I was told that I had no liver damage and was lucky that I was so young. In the early 2000s, the only treatment options were daily injections with interferon. The response rates from the medication were abysmally low and the side effects from the injections were similar to chemotherapy. I pondered whether or not I should go on treatment or wait. At the time, I worked two jobs and lived alone in a tiny studio. Also, the only people who knew I had the disease were my immediate family members and a few close friends. The stigma of having hep C caused so much loneliness and isolation. Even if I wanted to tell my co-workers about my condition, I wasn’t sure how they would react. As far as I knew, most people didn’t know anything about the disease. Those who did were often misinformed about it. Frustrated, I vowed only to talk to my doctor about my illness.

As I waited for new treatments on the horizon, my life went on. I moved to Florida to attend college and decided to follow my father into the field of substance abuse. I wanted to work with individuals who were struggling with drug addiction.

In 2011, I began volunteering at The Chance Center in St. Petersburg. It’s one of the few non-profits in the country that provides free treatment for individuals living with hepatitis C. They also treat people diagnosed with hepatitis B. While volunteering, I met drug representatives from Gilead and Bristol-Myers Squibb. I learned more about hepatitis C and advanced treatment options.

One sunny morning while studying, I got a phone call from a friend. He told me the FDA had just approved a new drug called Incivek. The physicians working on clinical trials for hep C were calling Incivek a game changer. For the first time since my diagnosis, I felt a rush of hope about going on treatment. Incivek, produced by Vertex, is a protease inhibitor. When combined with interferon and ribavirin, Incivek has been powerful in helping individuals infected with hep C achieve a SVR (sustained virological response). Finally, a combination of drugs that could actually clear the virus. I was thrilled and emotional.

I decided I was ready to go on treatment. Luckily, clinical trials for folks with genotype 1 were happening in my area. I signed up for a trial in the fall of 2011. After registering for five college classes, I cut back my work week to 32-35 hours. I made preparations for myself. Oddly, I didn’t feel nervous. I had been living with the disease for nearly eighteen years and was ready to go on treatment.

After a series of tests, my doctor informed me that all of my blood tests came back normal except for one. I was informed that my ANA titer (the amount of antinuclear antibodies in the blood) was high and that I should have the blood test done again just in case it may have been a false positive. I asked the doctor what could have possibly caused my ANA’s to be so high. He told me that it could be systemic lupus erthematosus (SLE), rheumatoid arthritis or some other autoimmune disorder.

My thoughts churned; my head felt light and fluttery. It seemed inconceivable that I may have another serious illness. I took really good care of myself and wanted nothing more than to get on the treatment and clear the virus.

The next day, I worked the front desk at The Chance Center. I was happy to see the other volunteers. Their positive advice and kind words were comforting to me. Although a high percentage of them had cleared the virus, they continued to stick around and help those who hadn’t gone on treatment yet. I will always be grateful to Gordon Lacata and Dreb Hope for the advice they gave to me and to others. ’Keep fighting the war,’ they would say. Don’t give up.

A week later, I received a call from the doctor who told me that my blood tests revealed the same results as they had earlier in the month. I would not be able to participate in the clinical trial. I cried. The doctor suggested I make an appointment with a rheumatologist, so I did.

She didn’t seem too concerned with my test results, and said I didn’t have any physical symptoms associated with SLE. I was told to make a follow up appointment in six months. I asked her thoughts regarding the hepatitis C triple therapy. She thought it was safe for me to go on it and that I should find a good gastroenterologist.

Three months after my last appointment with the rheumatologist, I was offered a job at an addiction facility back in New England. I wasn’t too keen on the idea of living in a cold climate again, but I made the tough decision to move back. I wanted nothing more than to go on treatment and figured it would be best to have my family around to support me.

In June 2012, I moved to Portland, Maine. In October, I began hep C treatment. The following June, I found out I cleared the virus. I shook and cried. I thanked the nurse incessantly for her kindness and support. I left work early, went home, and took a long shower. I wept some more and fell asleep with a smile on my face.

I am no longer silent. Ninety percent of the patients I see at my job are hep C positive. I am starting a hep C support group for them. I don’t want them to suffer in silence like I did.

What is your greatest achievement?
Clearing the hepatitis C virus

What is your greatest regret?
Allowing fear and shame to permeate my thoughts and life. My fear about the disease directly correlated with my feelings of inadequacies. Around the age of 19, I almost gave up on myself.

What keeps you up at night?
Stress and thinking about all of the things I want to do

If you could change one thing about living with viral hepatitis, what would it be?
To not be so hard on myself

What is the best advice you ever received?
A professor once told me that we never get anywhere in life unless we take personal and professional risks.

What person in the viral hepatitis community do you most admire?
Congressman Hank Johnson

What drives you to do what you do?
Compassion and empathy

What is your motto?
Concentrate on what you want to become, not what you are trying to overcome.

If you had to evacuate your house immediately, what is the one thing you would grab on the way out?
Probably my photographs. I treasure them over my books. Books can be replaced.

If you could be any animal, what would you be? And why?
I’ve always liked the idea of being a Roseate Spoonbill. Why? Because they are beautiful and unique.