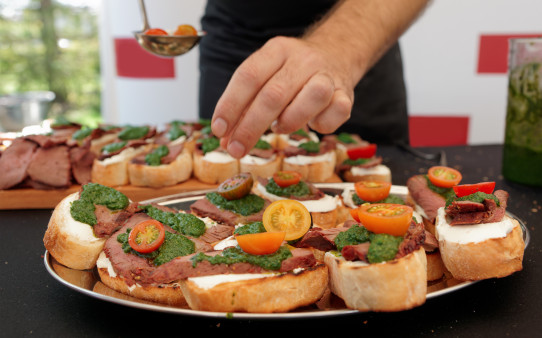 Hepatitis A can be spread through contaminated food. istock

The best ways to prevent hepatitis A are to get vaccinated and wash your hands frequently.

Health officials in Kansas, Maine and South Carolina have warned about cases of hepatitis A virus, the liver infection that is easily and most often transmitted through contaminated food and water as well as close contact with someone with the virus.

In addition, about a dozen cases of acute nonviral hepatitis have been reported in Nevada, some dating back to last August and November, and the only link between the cases is the alkaline drinking water brand Real Water.

The FDA, along with our federal, state and local partners are continuing to investigate reports of acute non-viral hepatitis in the state of Nevada associated with “Real Water” brand alkaline water. The firm has issued a recall: https://t.co/W6O2QbXD75 pic.twitter.com/XCPvieaAUY

One family has filed a lawsuit against the bottled water company alleging that the father and son experienced severe liver damage and became candidates for liver transplants as a result of drinking Real Water, KUTV in Las Vegas reports.

In response to the outbreak, the Food and Drug Administration (FDA) issued a voluntary recall of Real Water, warning people not to drink it, sell it or cook with it. However, the FDA recently announced it has learned that the product is still available and is even being promoted on social media. In addition, the FDA is auditing its own recall to see how effective it is.

The cases of hepatitis A virus (HAV), in contrast, appear to be more in line with typical hepatitis A outbreaks. For example, a food service worker at a Circle K convenience store in Orono, Maine, tested positive for hepatitis A; as a result, the Maine Center for Disease Control and Prevention warned that anyone who ate or visited there from March 6 to 9, 13 to 16 and 20 to 21 was potentially exposed, reports the Press Herald.

Meanwhile, the South Carolina Department of Health and Environmental Control reports a spike in hepatitis A cases in the Grand Strand and Pee Dee regions located in the northeastern part of the state.

“During this time of year, we have an influx of people from all over the place,” Michelle King, the director of infection prevention at McLeod Health told WBTW’s News 13, recounting potential reasons for the increase in cases, adding that another possibility is “people not washing their hands properly before eating or serving food. In some of our larger cities, we are going to have more homeless so we have certain areas in the Pee Dee [region] where we have large populations of people and there are large populations, there is more homeless people and more drug abuse happening.”

Health officials in Reno County, Kansas, also warned of a noted jump in hepatitis A infections. Seven cases have been reported this year, according to the Hutchinson News, compared with two cases in all of 2020.

The cases in this Kansas county seem to be confined to people with a history of drug use, the newspaper reports.

The best ways to prevent hepatitis A are to get vaccinated and to wash one’s hands frequently. To that end, the Orleans County Health Department in New York State launched a campaign offering free vaccines to food service workers living and working in the county.

“A food service worker can spread the virus to customers or other staff by contaminating surfaces, utensils and/or food, which can make unvaccinated individuals very sick,” said Brenden Bedard, director of community health services for Genesee and Orleans counties, in The Daily News. “By offering the vaccine to food service workers, we can prevent unnecessary illness from spreading in the community.”

HepMag’s Hepatitis Basics explains how hepatitis A is transmitted and what the symptoms are:

Hepatitis A is a type of liver disease caused by the hepatitis A virus (HAV). The virus is spread from one person to another when the feces of someone with HAV get into another person’s mouth. Even trace amounts of feces that are too hard to see can cause an infection. There are a number of ways that this can happen:

Not everyone who is infected with hepatitis A virus (HAV) will experience noticeable symptoms. For example, many babies and young children infected with HAV do not experience any symptoms of infection. Symptoms are much more likely to occur in older children, adolescents and adults.

Symptoms of hepatitis A (and acute hepatitis in general) can include:

It can take the immune system up to eight weeks to clear HAV from the body. If symptoms occur, they usually do so within two to four weeks after being infected. The symptoms of hepatitis A can last anywhere from a week to more than a month. About 15% of people with hepatitis A experience symptoms that last between six to nine months.