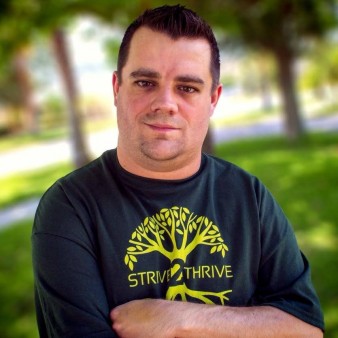 I never knew what a normal life looked like. I spent half of my life in and out of hospitals and Ronald McDonald houses. I was constantly surrounded by terminally ill children of my age. Despite this, I never felt sick or thought I was. From an early age, I knew that I had hemophilia, a blood disease that interferes with clotting. I needed to be extra careful of my body because if I bled, it could be life threatening. However, I was never told my full story, pieces of which didn’t fit together, that is, until I turned 18.

I had just graduated high school and was about to go to college. The world was at my fingertips. During a routine medical visit, the doctor sat down in front of my parents and said. “What is the worst virus you can get?” Not assuming anything too bad, I answered, “The flu?” He shook his head. “No, try again, but think worst case.” The only other virus I could think of was AIDS, so I said that. The doctor glanced over at my folks. Their faces had cold, unnerving expressions. Turning back to me he said, “Close. You’ve had HIV since age two. But, that’s not all. You also contracted hepatitis C as well, and neither is curable.” My world, my life and my future tumbled down in an instant. I felt like Alice in Wonderland, but stuck in an endless rabbit hole. College, dating, marriage, and my future were now clouded with uncertainty. I wasn’t even sure that I would make it to my twenties. My parents had known the entire time, but had never told me about HIV or hep C. I had taken pills and visited doctors for 18 years with no knowledge of the severity of my situation.

I never thought much wrong with me. Needles, IV’s, long hospital stays, 36 pills a day, lab work up to three times a week was my norm. Looking back at all the hospitalizations, surrounded by children with cancer and leukemia, the 12-hour long IV infusions, it all started to make sense. Not only was I born a hemophiliac, but I was co-infected with both HIV and hep C. A couple of years later, I further grasped the severity of my situation after my parents confided that they had begun planning my funeral when I was young. Two young boys, also hemophiliacs who had received contaminated blood products, had made national headlines in the 80’s. Ricky Ray and Ryan White had both died before they were 20 years old.  Since I was a child at the time, news headlines were not something that I would have paid attention to or understood. Now as an adult, it sank in that my parents were confronted with the reality that they could lose their child. I can’t begin to comprehend the burden that was placed on my parents shoulders, living with the knowledge that their only child would die from the very life-saving treatment used to treat hemophilia. The national coverage of these young boys escalated my parents’ worse fears.

In 2003, something changed my life forever, and gave me hope that God was not done with me. I was scheduled to have all four wisdom teeth extracted at the University of Kentucky Medical Center. All my doctors were on call, ready to be available if something went wrong. I went through the procedure fine, and was discharged the next day. The unthinkable happened when I got home. Unable to clot normally, my mouth began hemorrhaging blood in unimaginable volumes. The boxer vein in my jaw had been cut from wisdom teeth surgery and I was bleeding out at an alarming rate. My parents were at church, leaving me to rest at home. By the time they got to me, it was like a scene from a horror film. We live in the mountains of Appalachia, and the only hospital equipped to treat my complex condition was three hours away. My folks knew they had to try because my life depended on it. I finally got the bleeding under control by making a spongy seal over the extracted tooth socket using bath tissue.

We made it to University of Kentucky Medical Center. The bleeding had been somewhat controlled, but the doctors needed to see the area to treat it. When they removed my makeshift dressing, the vein opened up and bled out again. This time, even the medical team in the emergency room couldn’t stop it. I was fading fast from blood loss, drifting in and out of consciousness. My hands and feet got cold, and I passed out from the volume of blood loss. Although I was seconds from coding, I had a feeling of euphoria, and that God was there in the room. When the doctor yelled for assistance, it sounded like an echo coming from a distant tunnel, many hallways away. Time stood still, quiet and inviting. The coldness was replaced with warmth, comfort and peace. I was having a near-death experience. I don’t remember seeing a bright light or tunnels or friends or relatives, but I knew this life-changing experience was real. When I awoke hours later, I explained to my parents what had happened and what I saw. We just held hands, prayed and praised God. This was my turning point. I would use my life for God, and give Him all the glory He deserves for bringing me through this incredible life.

With the miracle of HIV anti-viral therapy, I’ve been spared from certain death. God stepped in and protected me on my journey. Some may say I was able to survive as long as I have because of luck. However, in a world where people need to see walking miracles to encourage their faith, I know beyond any doubt that Jesus Christ was using my life as a vessel for his truth. I started a new FDA-approved hep C therapy. On February 25th, 2014, God showed up in a miraculous way. The therapy is working. The sleeping dragon that has been attacking my liver the past 30 years has been slain. The giant has been conquered and through Christ’s redeeming grace and love, I’m walking around hep C-free.

Many said I couldn’t marry, work, or thrive, and that my life would be cut short, but Christ had other plans. Over 12,000 Hemophiliacs in the 80’s were infected with HIV, hep C or both. Of those 12, 000 less than 2% of us are alive today. Ricky and Ryan’s deaths weren’t in vain. Advancements in drug therapies have changed the fate of many living today with HIV. Now there’s a cure for hep C. God has taken my life and used it for His glory. It’s not my testimony, it’s God’s testimony. I’m just the vessel. I don’t have to search the world over for signs, wonders or miracles. The fact is, I already am one. I praise Him for my trials, afflictions and sufferings. Without them, I’m just an average Joe.

What three adjectives best describe you?
Faithful, comical, a people-person

What is your greatest achievement?
Finding solace in my faith, no matter how difficult the challenge. God is always working things out in our favor. We just have to believe it.

What is your greatest regret?
I don’t have any. Each mistake has been a learning experience to make me stronger.

What keeps you up at night?
Honestly, nothing negative. I’m usually writing, creating graphics or music, which consumes most of my nights.

If you could change one thing about living with viral hepatitis, what would it be?
Brain fog moments and zoning out

What is the best advice you ever received?
I am not my disease. Hemophilia, HIV, or hepatitis C does not dictate who I am; it only shapes me into the man I’ve become.

What person in the viral hepatitis community do you most admire?
Professional wrestler Devon Nicholson

What drives you to do what you do?
Anything I can do to help another, no matter what situation or circumstance. I’m all in. Helping others, counseling, and mentoring helps us strengthen our relationships.

What is your motto?
Strive to Thrive

If you had to evacuate your house immediately, what is the one thing you would grab on the way out?
My two precious dogs Raya and Bella, my wife, and my bible

If you could be any animal, what would you be? And why?
An eagle, to soar over land from above. They see things in different perspectives from us. Imagine seeing your life from 10,000 feet above? I think we’d make some changes.