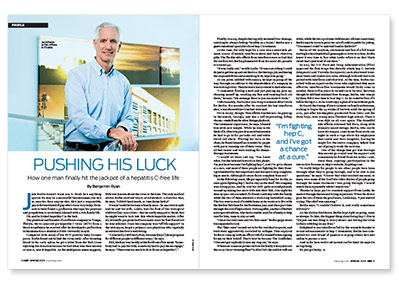 Jack Berlin doesn’t want you to think he’s anything special. He may be a successful businessman, but he’s no smarter than anyone else. He’s just a responsible, pay-it-forward kind of guy who’s been very lucky: fortunate to have found a profession that taps his passions and propels him to work hard; blessed with a rich family life.

Oh, and he kicked hepatitis C in the butt.

The president and founder of a software company in Tampa, Florida, the 60-year-old got hepatitis C virus  (HCV) from a blood transfusion he received after he developed a perforation in his stomach as a student at Duke University in 1976.

Compared with many of his HCV-positive baby boomer peers, Berlin found out he had the virus early. After donating blood in the early 1980s, he got a letter from the Red Cross rejecting the donation because he had what was then known as non-A, non-B hepatitis. As the ambiguous name suggests, little was known about the virus at the time. The only medical advice Berlin received was to avoid alcohol—a directive that, he says, “I didn’t heed much, so I am damn lucky!”

It wasn’t until he became a family man—he married in 1986 and he and his wife, Leslie, had the first of two biological children four years later—that he really stopped to think that he might want to look into this whole hepatitis matter. After all, scientific progress had been made since he first found out he was infected. Once his company was “off life support” in the mid-1990s, he got a primary care physician who regularly monitored his liver’s well-being.

“I was lucky I still had a liver, because [hep C] does progress for different people in different ways,” he says.

Finally, in 2003, despite having only minimal liver damage, and despite always feeling “healthy as a horse,” Berlin saw a gastrointestinal specialist about hep C treatment.

At the time, the only hope for a cure was a miserable 48-week course of weekly interferon shots and daily ribavirin pills. The flu-like side effects from interferon were so bad that the six-foot-two Berlin plummeted from his usual 180 pounds to around 140.

“It was really sad,” recalls Leslie. “It was everything I could do just to get him up and out the door. But having a job, and having the responsibilities and something to do, kept him going.”

At one point, saddled with nausea, he kept on going all the way through an address to the shareholders of a company he was looking to buy. Then he beat a hasty retreat to the bathroom.

“I remember finding a stall and just puking my guts up, cleaning myself up, washing my face and running back out there,” he says. “My message there is you can make it work.”

Unfortunately, that brutal year-long treatment didn’t work for Berlin. Six months after he received his last interferon shot, a test showed his virus had returned.

Not to worry, though. This affable Southerner—he grew up in Savannah, Georgia, and has a self-deprecating, folksy charm—reads from the silver linings playbook. The treatment experience, he says, blessed him with new insight. While he was in the thick of it, ribavirin gave him such bad anemia he had to go in for periodic red and white blood cell shots. Waiting his turn in the clinic, he found himself surrounded by people with ports running out of their veins. They all had cancer and were waiting for chemotherapy treatments.

“I would sit there and say, ‘You know what, I’m the luckiest bastard on this planet. I’m just here because I’m fighting hep C, and I’ve got a chance at a cure, and most of these people are fighting for their lives.’ I got humbled by that experience and learned to stop complaining so much. Although it’s more fun to complain than not.”

In the following years, life got especially busy for Berlin, so once again fighting hep C had to stay on the shelf. His company was doing great, and he and his wife quite serendipitously wound up taking two more kids into their fold. One night his then-15-year-old son asked if a friend could stay with the family while the two of them attended a week-long basketball camp. The boy was in need of a stable home so he went on to live with the Berlins full-time for his freshman year, and then part time through the rest of high school. Not long after, another of Berlin’s son’s sports buddies, who had a similar need for a family to help care for him, came to stay as well.

“I have two real ones and two fake ones!” Berlin quips about his expanded brood.

The “fake ones” turned out to be the real deal in sports, and both were aggressively recruited by colleges. This required Berlin to come up with an official title for himself when signing forms on their behalf. That’s how he became The Godfather. “I haven’t got anybody to kiss my ring yet,” he says.

Whenever someone points out how his family’s story mirrors the 2009 Oscar-winning film The Blind Side (he and his wife are white, while the two sport-star children are African American), Berlin says he loves to get a rise out of Leslie in public by joking, “You mean I could’ve married Sandra Bullock?”

But as all the mayhem, excitement and fun of a full house and high school basketball games galore drew to a close, Berlin knew it was time to face what Leslie refers to as that “dark cloud that’s just kind of out there.”

In 2011, the U.S. Food and Drug Administration (FDA) approved the first drugs that directly attack hep C. Incivek (telaprevir) and Victrelis (boceprevir) each shortened treatment times and raised cure rates, although both still had to be paired with interferon and ribavirin. At the time, Berlin consulted with an expert on the virus who explained that more effective, interferon-free treatments would likely come in another three to five years (it turned out to be two). But even though he still had minimal liver damage, Berlin, who was 56 by then, felt it was time to beat hep C. So he could be free of it before the big 6-0. So he could enjoy a glass of wine without guilt.

He based the timing of his treatment on family milestones, waiting to begin the 24 weeks of Incivek until the spring of 2012, just after his daughter graduated from Duke and the three boys, now young men, finished high school. Then it was déjà vu all over again. The dreadful side effects returned full force, along with dramatic mood swings. Berlin, who rarely loses his temper, came home from work one night in such a rage about his employees that Leslie and their daughter, fearing he might fire the entire company, talked him out of going to work the next day.

One of the things that got him through this second go-round was the support and community he found from his active—and, since then, ongoing—participation in the interactive forums on Hep’s website, HepMag.com.

“It really helps for people to see other people have been through what they’re going through, and to be able to ask questions,” he says. “I know that what touched me most, to tears, were some of the YouTube video diaries of people going through the same treatment I was going through. I would watch them repeatedly while I was down.”

Thanks in large part to constant support from Leslie, he made it through that second trying experience. When the doctor gave the two of them the good news, Leslie says, “I just started crying. The relief was amazing.”

As the elation died down, Berlin kept right on going, same as always. To him, the biggest thing about being hep C-free is “it’s just one less thing to worry about—not having the virus in there nibbling on my liver.”

Delighted to see interferon fall by the wayside thanks to recent advancements in hep C treatment, Berlin has committed his own brand of passion to urging others he’s met online to pursue a cure.

And as for how well it all turned out for him? He says it’s no big thing.

He just got lucky.