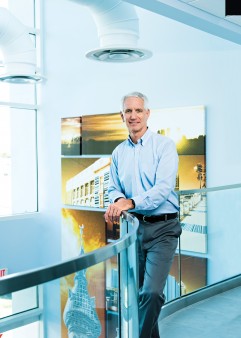 The following is an excerpt from the Hep Spring 2015 cover story:

Jack Berlin doesn’t want you to think he’s anything special. He may be a successful businessman, but he’s no smarter than anyone else. He’s just a responsible, pay-it-forward kind of guy who’s been very lucky: fortunate to have found a profession that taps his passions and propels him to work hard; blessed with a rich family life.

Oh, and he kicked hepatitis C in the butt.

The president and founder of a software company in Tampa, Florida, the 60-year-old got hepatitis C virus (HCV) from a blood transfusion he received after he developed a perforation in his stomach as a student at Duke University in 1976.

Compared with many of his HCV-positive baby boomer peers, Berlin found out he had the virus early. After donating blood in the early 1980s, he got a letter from the Red Cross rejecting the donation because he had what was then known as non-A, non-B hepatitis. As the ambiguous name suggests, little was known about the virus at the time. The only medical advice Berlin received was to avoid alcohol—a directive that, he says, “I didn’t heed much, so I am damn lucky!”

It wasn’t until he became a family man—he married in 1986 and he and his wife, Leslie, had the first of two biological children four years later—that he really stopped to think that he might want to look into this whole hepatitis matter. After all, scientific progress had been made since he first found out he was infected. Once his company was “off life support” in the mid-1990s, he got a primary care physician who regularly monitored his liver’s well-being.

“I was lucky I still had a liver, because [hep C] does progress for different people in different ways,” he says.

Finally, in 2003, despite having only minimal liver damage, and despite always feeling “healthy as a horse,” Berlin saw a gastrointestinal specialist about hep C treatment.

What is your greatest achievement?
I think I was a good dad—my most important job.

What is your greatest regret?
There are lots to choose from. Opportunities not taken when worry and my drive to succeed don’t allow me to enjoy the moment. I have missed times with my family that I won’t get back.

What keeps you up at night?
I worry about things issues involving my kids. I can sleep even when I have money issues or other crises, but if one of my kids is having issues, I hurt worse than they do.

If you could change one thing about living with viral hepatitis, what would it be?
I would have worried less. I have been very fortunate that the disease progressed very slowly, but as a worrier, it wore hard on me, especially for the many years that there was little hope of treatment. I don’t know if I could have worried less and trusted that science would advance. I am still in awe of the hep C treatment advances made in the last 15 years.

What is the best advice you ever received?
“Shut up” and “choose your battles,” or some nicer form of that advice. We have two ears and one mouth for a reason, and often it is best to be quiet even if you think you are right.  The cost of being right can be expensive, especially if you are arguing over nonsense, and most things are nonsense really.

What person in the viral hepatitis community do you most admire?
Lucinda Porter. I was in the dark during my first treatment, and had no information. For my second treatment, I went out and got informed! Others who had walked the path before me were heroes, which is why the Hep Forum is so important. Ana Johnson and Sarah Ross both did treatment video blogs that were very inspirational to me; Ana’s seems to be off YouTube, but here is a link to her NPR interview. Here’s Sarah’s YouTube video.

What drives you to do what you do?
I am driven.  Either I do something 110 percent, or I don’t do it.

What is your motto?
I don’t have an official motto. I don’t do things half-assed. I guess if I were to choose a motto, it would be, “Do your best; it is OK to fail, as long as you always do the best you can.”

If you had to evacuate your house immediately, what is the one thing you would grab on the way out?
My laptop, because all the photos and records are stored there.

If you could be any animal, what would you be? And why?
Any kind of bird; I would love to be able to fly.