Hepatitis C virus (HCV) protease inhibitors are not cost-effective for first-time treatment takers with HCV genotype 1 and the IL-28B CC genotype, according to analysis conducted by Ziad Gellad, MD, MPH, of Duke University Medical Center in Durham, North Carolina, and his colleagues. They reported their findings on Monday, November 7, at the 62nd annual meeting of the American Association for the Study of Liver Diseases (AASLD) in San Francisco. According to the study authors, people with the IL-28B CC genotype are more likely to be cured with pegylated interferon and ribavirin alone than people with the IL-28B CT or TT genotypes, for whom the addition of either Incivek (telaprevir) or Victrelis (boceprevir) may be more cost effective.

According to the analysis by Gellad’s team, the cure rates among first-time treatment takers with the CC genotype were similar, yet the costs of each regimen varied considerable. Among those who qualified for 24 weeks of RGT with pegylated interferon and ribavirin alone, the cure rate was expected to be roughly 71 percent at a cost of $46,785. The cost increased to $54,931 when interferon/ribavirin was used for a total of 48 weeks, with an expected cure rate of 66 percent. If retreatment was necessary in either circumstance, roughly 87 percent to 91 percent would be cured.

Starting hepatitis C treatment with an Incivek-inclusive regimen was expected to cure 89 percent of HCV-positive individuals with the CC IL-28B genotype—at a cost of $68,788. According to estimates of lifetime treatment costs and quality-adjusted life-years (QALYs) measurements, however, the gain did not differ significantly compared with the other two strategies.

Adding Incivek to pegylated interferon and ribavirin was cost-effective for first-time treatment takers in certain circumstances, Gellad and his colleagues noted, such as when it enhanced the early response to hepatitis C treatment (known as extended rapid virologic response, or eRVR). An eRVR—when hepatitis C viral load is undetectable at treatment week 4 and remains that way at week 12—is a strong predictor of being cured. Incivek was considered cost-effective when it boosted the eRVR rate to 89 percent. For people who did not have an eRVR, Incivek was cost effective if it could increase cure rates to over 80 percent. In addition, the authors considered Incivek to be cost-effective for retreating people who relapsed or did not respond to dual therapy.

In summary, for first-time treatment takers with the IL-28B CC genotype, adding Incivek “is unlikely to be cost-effective under current cost and efficacy conditions,” said Gellad, who concluded by recommending research to compare effectiveness of treatment with and without an HCV protease inhibitor in this group.

Over 25% of Women With Hep C Were Diagnosed During Pregnancy 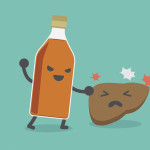 Hospitalizations for Alcoholic Liver Disease Are on the Rise